If not for the 10% young lambic blended into this beer (which provides enough lively yeast and fermentables to allow for carbonation in the bottle), it would be something akin to Single Barrel Lambic, an intriguing concept. The other 90% is sourced from a single oak foudre, numbered (you guessed it) 77. This particular cask was originally made in 1907, and while it’s survived two world wars and undoubtedly seen other uses during its long history, it’s been used by Boon to age three year old lambic for use in their gueuze blends since 1986. Apparently Frank Boon has a particular love for the beer that comes out of this cask, and so when they started this mono-blend series, it was only a matter of time before it was selected for a release. These fine folks even managed to snag a picture of the foudre: 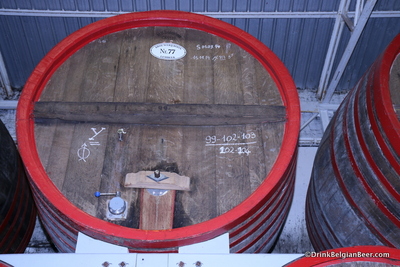 Of course, these foudres are gigantic (averaging 8,000 liters each), so don’t expect to see anything like the Single Barrel Bourbon or Scotch world, where local stores pick a barrel and bottle it, but wouldn’t that be neat if beer could pull off something like that? You know someone would take a flier on a Password is Taco barrel or snag a single barrel BCBS, or fly to Belgium and snag a Cantillon barrel. I doubt most breweries would be all that keen on the prospect, but who knows? Maybe one of these big barrel programs will differentiate themselves with this sort of thing (and, you know, do a better job than Retribution). In the meantime we’ll have to make due with approximations like this Mono Blend, which was actually a really interesting beer and something I’d like to compare against future releases… Let’s take a look at how it’s drinking now: 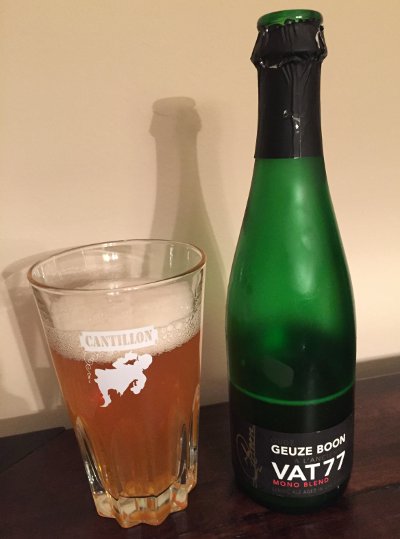 Boon Oude Gueuze A L’ancienne Vat 77 Mono Blend – Pours an almost clear golden color with a finger of fluffy head that lasts for a bit, but not indefinitely. Smells quite funky, lots of earthiness, lots of farmhouse, maybe even some funky cheese character. Taste also goes quite earthy, and frankly doesn’t feel all that sour at all, lots of leathery farmhouse character, not as cheesy as the nose would have you believe I guess, but still quite different than I’m used to for a Gueuze. Mouthfeel is well carbonated, medium bodied, only a very slight hint of acidity, much more funky than sour. Overall, this is an interesting beer! I don’t quite know what to make of it, actually, as it’s really quite nice, but also not your typical Gueuze… B+

Next up in the Mono Blend series is Vat 79, which is apparently the oldest cask they have, dating back to 1883. Would love to compare these two next to each other someday. In the meantime, Boon is one of the few Lambic producers who you can actually find, so go out there and snag some of those Marriage Parfaits, they’re pretty good too.