I’m continually fascinated by the subtleties of barrel aging. It’s fun to try and reverse engineer what makes one beer great and another not as successful, though I’ll be the first to admit that my SWAGs are just that. I am totally the worst, as has been amply demonstrated in this here blog. There are so many things that could impact the final product (i.e. the base beer recipe, the barrel conditions, the brand of bourbon used, the time in the barrel, and so on) that it’s hard to pinpoint causality. But it’s still fun, because I’m the worst! So let’s look at a couple of cases.

Last year, I was blown away by Stone Fyodor’s Classic, a revelatory BBA imperial stout. As such, when this year’s vintage rolled around, I was fully on board and went out of my way to procure some. I excitedly popped the cork on the new bottle and quickly found myself underwhelmed. It was fine, but it was not the revelation of the previous year’s vintage. Surely this is just subjectivity at work, right? Revelations tend to be one time things and I do kinda hate when people quickly proclaim that this year’s batch of this or that hyped beer is not as good as last year’s (a perennial complaint about Pliny the Younger and Hopslam, for instance), so I kinda wrote off my reaction as unwarranted. Then I had another underwhelming bottle and noticed something on the back. Because I’m a packrat that saves empty bottles of beer I really liked (I am the worst), I checked last year’s bottle and lo: 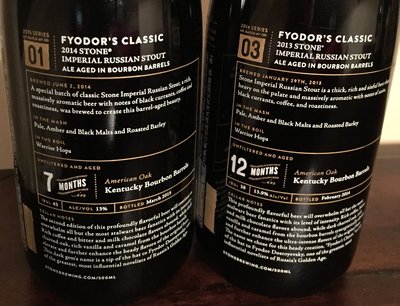 7 months in the barrel versus 12 months. It appears I was not imagining things (not the worst? Eh, let’s reserve judgement on that one.); the extra time in the barrel apparently works wonders! But then, given all the other variables, we can only really apply this conclusion to Stone’s IRS. Other beers aged for 7 months or less have still turned out well, so age probably isn’t always the operative factor. But it clearly made a difference here, and I have to wonder how many people bought this year’s vintage after having heard the praise of the previous year…

In the case of California’s Cismontane brewery and their Black’s Nocturne, I’m at a disadvantage since I’ve never had the original vintage. This will not stop me from speculating though, since I am the worst (see? Told you.) The beer actually has a great reputation, and while I enjoyed this new bottle, I don’t think it rivals the best of the bourbon barrel aged stouts. It’s true that this is a high bar to clear, but after I drank this and looked at the reviews, I was surprised by the discrepancy. So I looked into it, and a few things jumped out at me. This year’s vintage is “aged in Markers Mark bourbon barrels for 289 days” and clocks in at 11% ABV. The previous iteration? A 12% ABV beer “aged … for nearly a year in fresh Heaven Hill Bourbon barrels, which we then blended in an attempt to tame the bourbon beastliness.” So there’s lots of differences here. First, Heaven Hill versus Maker’s Mark should make a difference (and honestly, I’m not a huge fan of Maker’s), then you’ve got the ABV, and finally a blending with fresh beer. All of which is to say, this year’s vintage probably does not resemble the previous vintage. I’d be really curious to test out that hypothesis, but I don’t think that’s in the cards. In the meantime, let’s take a closer look at this sucker: 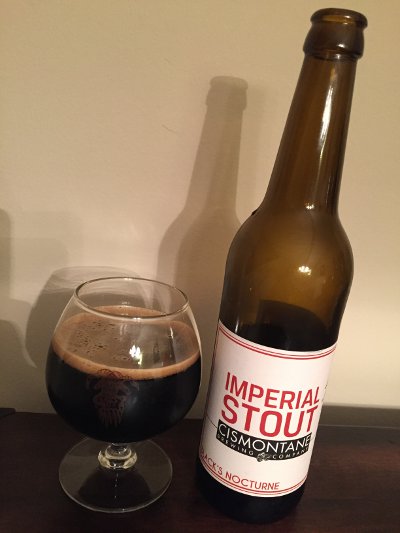 Cismontane Black’s Nocturne – Pours a deep black color with a finger of quickly dissolving tan head that nevertheless leaves a little lacing. Smells sweet, lots and lots of vanilla, less in the way of bourbon and oak, hints of caramel and roast but they’re not as prominent as expected. Taste has some of that rich caramel, a little bit of roast, hints of liquorish, and a surprisingly clean finish. Mouthfeel is well carbonated, medium bodied, and while it’s not dry, it’s surprisingly light on its feet. That being said, absolutely no hint of the high-ish ABV here at all, though it’s still a sipper. Overall, it’s an interesting and tasty beer that I’d certainly try again, but nowhere near top tier BBA stouts. B+

I’d certainly try this again, but I’ll be even more curious to try next year’s vintage, if I can swing it.