According to BeerAdvocate, there are currently 34 different variations of AleSmith’s venerable Speedway Stout, ranging from numerous different coffee varieties to different barrel aged treatments to totally wacky shit like Tiramisu or Maple Blueberry Pancake. In general, though, what you see at the store is the original Ryan Bros. Coffee version, which is fantastic, to be sure, but you hear about all these variants and can’t help but wonder… The grand majority of this stuff is probably brewery-only distribution, but one can’t help but pine for a taste. So I was more than a little surprise when a little birdy told me that a local beeratorium was going to be tapping a keg of Vietnamese Coffee Speedway Stout, a particularly prized variant. Despite my legendary antipathy towards coffee stouts, I rather enjoyed regular Speedway, and still wanted to get a taste of the good stuff.

So what makes this special? First made in 2012, this beer utilizes a blend of four Vietnamese coffees, known in Vietnam as cà phê sa đá, that are then slow roasted at low temperature (a salient point, and perhaps one of the reasons I like this – that treatment supposedly lends a less bitter, less roasty, less burnt flavor, though I’m obviously taking someone’s word for this since I’m not a coffee guy) and brewed using traditional Phin-style filter. Looking into this, it seems a bit odd, because the Phin-style filter is a single-cup, gravity driven brewing tool, so did they brew enough for a full batch of beer using single cups? Whatever the case, it worked, because the result is a wonderful beer (erm, not the greatest picture, sorry about that): 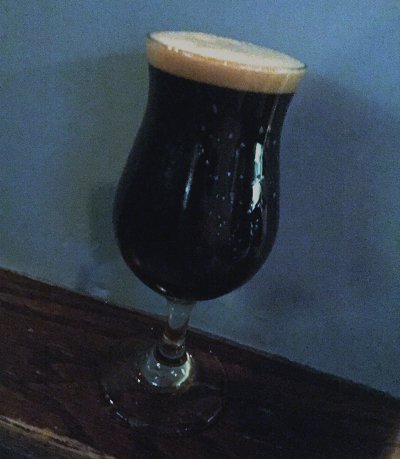 AleSmith Vietnamese Coffee Speedway Stout – Yes, it’s black with half a finger of tan head that leaves lacing as I drink. Smell has a great vanilla component, but the typical roasty, coffee, dark chocolate notes also make the requisite appearance, seems less intense but more complex. Taste is all rich, dark malts, caramel, vanilla, well balanced hop bitterness, a healthy roastiness, and yes, a very nice mellow coffee, especially in the finish. We all know I’m no coffee fiend, but this is my kind of coffee beer. I had this a second time later in the week and felt that the vanilla component wasn’t as prominent, but I’m guessing that was just because I had it after drinking a bunch of other beers. Mouthfeel is full bodied and moderately carbonated, well balanced but a little boozy heat makes itself known, especially as it warms up. Overall, right up at the top of my coffee beer ranking… A-

After getting a small taste of BA Speedway, and now this, I’m thinking I need to get on the ball with AleSmith’s special releases!