Tahoe Mountain is a new brewery to me, introduced by our mutual friend Jay from Beer Samizdat in a recent cross-country trade. They appear to hail from Truckee, CA, on the Eastern side of the state near, you guessed it, Lake Tahoe. In fact, it appears they’re just a few miles down the road from Kaedrin favorite FiftyFifty, which makes Truckee a pretty impressive little brewing town considering its location. They seem to be big on experimentation and barrel-aging, which is music to my earballs, so let’s take a closer look at the two beers Jay flung my way, drunk whilst engaging in a mini-Larry Cohen horror movie marathon.

First up is their “full-bodied, yet sessionable rustic multi-grain Farmhouse Ale”, a description bound to annoy English readers since it clocks in at 6.2% ABV. Perhaps these guys graduated from the Adam Avery “They’re all session beers” school of thought, though this is admittedly a pretty easy going beer. Strap in folks, it’s going to be a relatively smooth ride, but you can never be too careful: 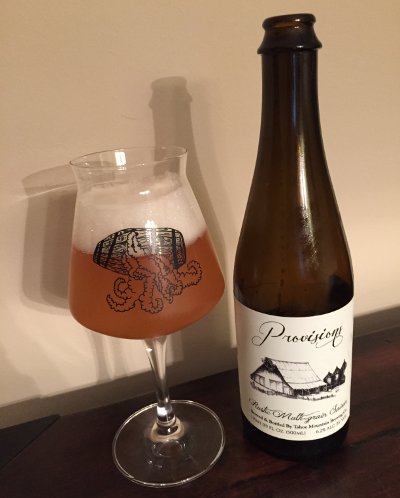 Tahoe Mountain Provisions – Pours a hazy golden yellow color with several fingers of fluffy white head that sticks around and leaves lacing all over the place. Smells spicy, bready belgian yeast, with an almost grapelike fruit aroma kicking in too. Taste crackles with that spicy character, a little bit of a bite there, with only hints of yeasty esters lingering towards the finish. Mouthfeel is highly carbonated, crisp, and effervescent, very dry, but with enough firepower to keep it from feeling slight. Overall, what we have here is yet another rock solid but traditional style saison. B+

Next up, we have a wild ale “aged two years in oak cabernet barrels with fresh cherries and blueberries”, which sounds a mighty bit more experimental than the previous beer. Let’s see what’s up: 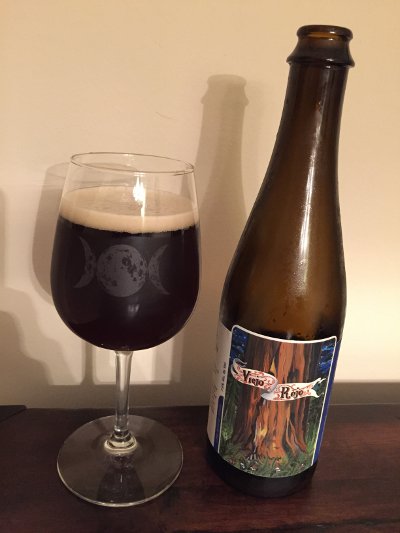 Tahoe Mountain Viejo Rojo – Pours a dark amber color, deep robey tones, nice looking when held up to light, with a finger of off white head. Smells Flandersy, acetic sour cherries, a little oak and vanilla rounding things out. Taste has a nice rich sweetness to it, some of those sour cherries pitching in, dark vinous fruit, clearly some dark (but not roasty) malts contributing, vinegar and a nice, well matched sourness puckering things up in the finish. As it warms, the tartness creeps up earlier into the taste, but regardless, it’s more sweet than sour. Mouthfeel is full bodied and rich, well carbonated, some vinegary acidity cuts through it all, but is not overpowering. Overall, this is a really nice sour, along the lines of a Flanders red, and makes me want to check out more Tahoe Mountain stuff. A-

Certainly a promising start for a brewery I’ve never heard of before. Here’s to hoping Jay slings more of these my way in future trades!