A couple weekends ago, I celebrated my birthday, and with it, uncorked a few prized possessions including this hallowed lambic from Drie Fonteinen, a blend of lambics aged on mostly whole raspberries from the fabled Pajottenland, but also includes some cherries and probably some other twists and turns. They don’t call Drie Fonteinen’s Armand DeBelder a master blender for nothing, and this beer was made in honor of his late father, Gaston DeBelder, so you know Armand went all out with this one. They’ve only made this twice, once in 2007 and once in 2013. I figured 8 years was enough aging for this one and dug into that first. It did not disappoint.

I don’t put much credence to the pretty ridiculous White Whale list, but on a hunch I just looked it up and yes, this marks the first time I’ve had a beer from that ridiculous list (note that the 2013 vintage didn’t make the cut). As you all know, rarity makes beer taste better, so let’s fire up those three big fountains and get a load of this amazing beer: 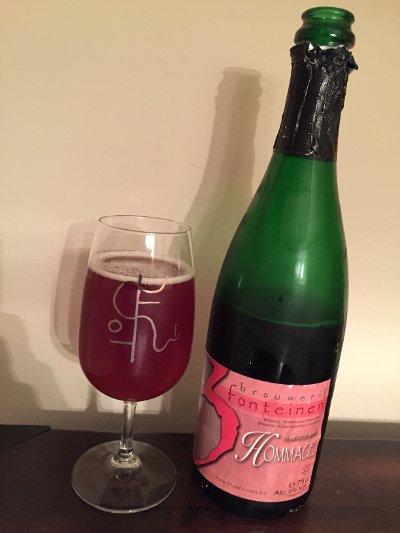 Drie Fonteinen Hommage (2007) – Pours a very pretty pink hued amber, robey tones, finger of fizzy off white head that nonetheless sticks around for a bit. Nose is beautiful, raspberries, cherries, blackberries, berries galore, along with a deep, earthy funk and a little oak too. Taste goes in hard on that jammy berry front, again with the berry cornacopia, predominanty raspberry, but some other berries for good measure. Things get a little acetic and sour in the middle, followed by some of that deep, earthy funk, a unique character actually, but quite tasty. Finishes off with a nice oak and vanilla component that yields to a lingering sour note. Mouthfeel is on the lower end of full bodied and rich, jammy, slightly acidic, moderate to high carbonation cuts through nicely, certainly not a gulper, but very well balanced and a great sipping experience. Overall, this is intense, complex, funky, and balanced, leaning more to the rich and oaky side of fruited lambics (like Cantillon Kriek) than the light an airy (like, say, Fou Foune or St. Lamvinous), a wondrous beer, absolutely delicious. A 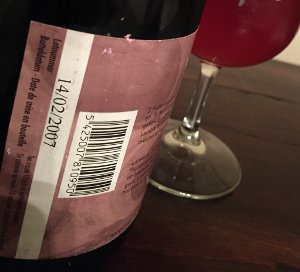 Wales, bro. Well that was impressive. After this one, I cracked a 2012 BCBS, which was holding up exceptionally well. Let’s just say it was a good night. I actually have a 2013 vintage Hommage that I may have to hold onto a little longer, but I’m betting it will be opened sooner rather than later. I love these lambics, but they’re a bear to get ahold of these days. Even Kaedrin secret Tilquin is starting to disappear from shelves these days. I have a couple Drie Fonteinen Gueuze in the cellar as well, and hope someday to try some of their other stuff. Cantillon has the reputation for better fruited lambics, but if this beer is any indication, they’re basically on the same hallowed field.