Welcome to autumn, fuckheads! I’m not going to say that I’m a huge pumpkin beer fan, but I don’t really get the disdain for them either. Of course there’s no accounting for taste, and some people genuinely don’t like it, which is fine. My answer to that is the same as my answer to pumpkin beers showing up on shelves in August: if you don’t like it, don’t buy it. It’s pretty simple, really, and I find it hard to get worked up about pumpkin beers either way. Every year, I attempt to go out and try something new. What has aided this in recent years has been a diversification of base styles. It used to be that the grand majority of pumpkin beers were a simple amber base with lots of spices and pumpkin added in. Nothing wrong with that, and there are some great examples out there. But nowadays, we’ve got stouts, weizenbocks, barrel-aged wonders, heck, Tired Hands even made a sorta pumpkin spiced Seasonal IPA (It was decent!)

What we have here is our Alaskan friends’ entry into the fray, a chocolate pumpkin porter brewed with pumpkin, cocoa nibs, cinnamon, cloves, and nutmeg. Seems like a pretty hearty take on the pumpkin beer, so let’s dive in: 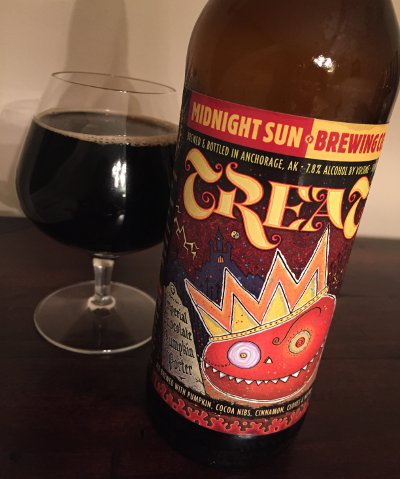 Midnight Sun TREAT – Pours a deep, dark brown color with half a finger of off white head. Smell sweet with lots of those pumpkin spices, cinnamon standing out more than anything else, but if you really look for it, you can get some chocolate too. Taste starts off sweet, but drops off a bit as the spices take over, notes of chocolate in the finish. Mouthfeel is well carbonated, medium bodied, thinner than expected actually, well attenuated but not quite dry. Overall, a solid pumpkin porter, if a bit one-note and I have to admit, I thought I’d enjoy this a little more than I did. B

As always, I have to wonder if the oak aged version would tweak my fancy a little more. We may yet find the answer to that conundrum, though no current plans. Up next in this decorative gourd season jamboree will be a pumpkin sour beer? You betcha.