We’re big fans of Almanac Brewing’s Farm to Barrel series of beers here at Kaedrin, but they also have a flagship line of fresh beers that are regularly available, like this dry-hopped, multi-grain saison named after landmarks (Dolores Park?) in the Mission District of San Francisco (not, as originally thought, that episode of Seinfeld where Jerry can’t remember his girlfriend’s name. Mental note: I should brew a beer called “Saison Mulva” sometime.)

The dry-hopped saison field is pretty crowded though, with stuff like Firestone Walker Opal, Off Color Apex Predator, and even the staid, old-school Belgian brewers getting into the game with Saison Dupont Cuvée Dry Hopping, all widely available (and all fantastic). That’s before getting to micro-distroed (is that a thing? Is now!) wonders like Hill Farmstead Dorothy or Tired Hands Shambolic. This is some stiff competition, so let’s shuffle on down Dolores Street to see how this one compares: 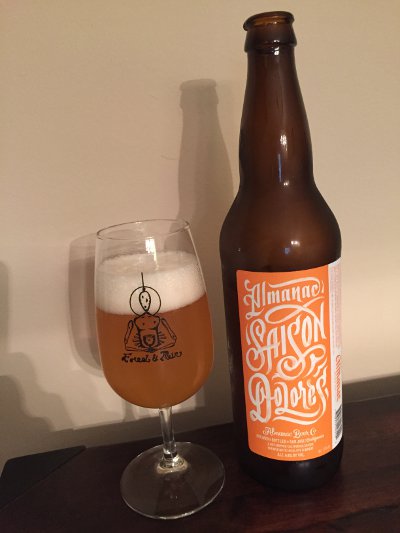 Almanac Saison Dolores – Pours a cloudy golden yellow color with a few fingers of fluffy white head. Smell has a very nice grassy hop aroma mixed with some musty Belgian yeast spice and esters… Taste has a light spicy note, some fruity esters, and then those grassy hops kick in towards the finish. As it warms, it evolves into a more spicy, peppery character, rather tasty. Mouthfeel is well carbonated, crisp, and effervescent, quite dry, a great match for food. Overall, it’s a rock solid, standard saison that will stand up to most in that particular arena. B+

Many thanks to Jay of of the right excellent Beer Samizdat for sending this to me (and if I recall, introducing me to Almanac in the first place, way back when). It’s certainly on the same field as its competition and if these fellas were local, I could see cracking one of these every so often (just like I order up a glass of Shambolic every so often at Tired Hands), even if I find the Farm to Barrel series more eye-popping. Speaking of which, two of those in the pipeline, so keep an eye out (or, you know, protect them from the eye-popping awesomeness of those beers).