Many moons ago, all the cool kids were talking about this rad wild ale brewed with Brett and plums and lo, I was jealous. In typical Kaedrin fashion, I’m about four years late to the party, but I have to say, it was totally worth the wait. Telegraph feels like an underrated gem. Everytime I have something from them, I come away happy, and they’ve only grown in my estimation over time. This Gypsy Ale is the best I’ve had yet. What is it, you ask? In an interview with our friends over at Beer Samizdat, Telegraph brewer Brian Thompson recounts this beer’s origin story:

Our Gypsy Ale was born from a conversation at the brewery over some beers. Paul Rey, one of our brewers, has very eclectic musical tastes. He had some Roma Gypsy music playing one day and we got to talking about what a Gypsy beer would be like. Definitely wild, we thought, and rustic, with some less common grains, like rye. And we remembered a Serbian guy we know who, at parties, always pulls out these re-used plastic water bottles full of slivovitz plum brandy he brings back with him from visiting his mother. Since I have a big plum tree in my yard, it clicked. We would add plums to a barley- and rye-based strong ale, and age it with Brettanomyces. 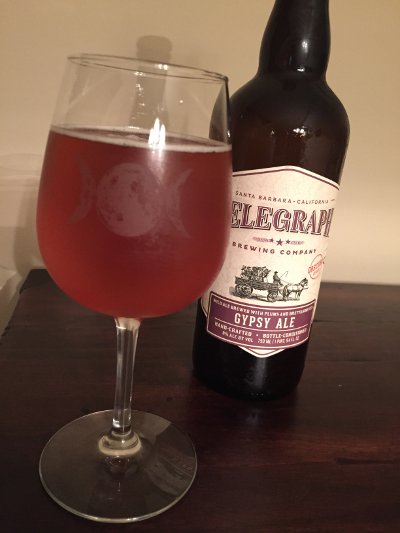 Telegraph Gypsy Ale – Pours a mostly clear golden orange color with a finger of white, fluffy head. Smells great, spicy, fruity, funky, earthy, very, very nice nose. Taste follows the nose, spicy up front, followed by lots of tart stonefruit, plums, cherries, and the like, leavened by some earthy funk, with an almost acetic sourness pitching in towards the finish. Mouthfeel is well carbonated, crisp, and bright, medium bodied, slightly but pleasingly acidic, easy to polish off the 750. Mouthfeel is always something Telegraph has excelled at for me, and this is no exception, it’s wonderful. Overall, this is a complex, delicious beer, certainly an underrated beauty. A-

These guys distribute out here in PA, but they only show up sporadically. Well worth seeking out! Many thanks to Jay for parting with this one, and I’m very sad that another Telegraph ale didn’t survive the cross country trek. I actually snagged a bottle of Reserve Wheat to share with some friends in a few weeks, hoping to blow some minds (it was certainly an eye opener for me!)