What we’ve got here is a Double IPA from the bay area, clocking in at 88 IBU and 8.8 ABV, I think I sense a pattern. Looking at the can I see it is hopped with something called Omakase! I mean, I’m pretty nerdy about this stuff, but even I can’t keep up with all the new hops these days. So let me google that for you and, huh, it’s a term used in sushi dining? So, like, these nutty brewers put raw fish in the beer? Fortunately not. Omakase translates to “I’ll leave it to you” and its frequent use in sushi restaurants basically amounts to letting the chef select a series of plates to comprise your meal (usually working from light fare to heavier, richer dishes). The application to hops isn’t that hard to suss out. The brewers always brew with the same recipe, but they vary the hops as they see fit for each batch. Neat idea, though the lack of any identifying batch number on the can means it’ll be tough to figure out what you’re in store for. Still, small breweries are often shut out of long term hop contracts and thus have to deal with inconsistent supply. This seems like a playful way of dealing with that (or perhaps they just like the idea in general, why not?) So how did this particular batch turn out? 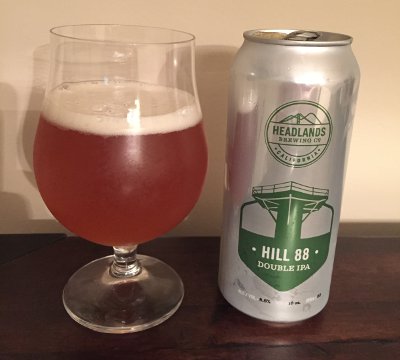 Headlands Hill 88 – Pours a hazy golden orange color with a finger of white head that leaves some lacing as I drink. Smells very sweet, some candy-like aromas, lots of dank pine hops, maybe hints of citrus. Taste is also very sweet up front, with that dank, resinous pine really coming through in the middle, and a bracing hop bitterness in the finish, along with a little booze. Mouthfeel is well carbonated, smooth, medium bodied, a little sugary but not cloying. Overall, it’s a solid DIPA, but it doesn’t really separate itself from the pack at all. Unremarkable, but a nice pint nonetheless. I can’t help but wondering how this compares to other batches, which is an interesting thought. B

Many thanks to heroic bay area resident Jay of the most excellent Beer Samizdat for sending this one my way. I’ll have a few other ungettables from him in the near future, so stay tuned.