Parageusia is the medical term for a bad taste in the mouth (though there are some definitions that are more charitable and call it it “an abnormal or hallucinatory sense of taste” which is perhaps more fitting in this context), but that doesn’t stop beer geeks for going bananas about this stuff. After the initial and bizarrely theatrical first taste of Para1 and Para2 at last year’s Anniversary, the two subsequent bottle releases were the most crowded I’d been too (even if I still managed to secure my allocation). Parageusia3, having built on its younger siblings’ reputation, had an absolutely cuckoo nutso release. I got there 3 hours early and was almost certainly a couple hours too late (I did not stay to find out, but I’ve heard that my position in line was far from viable). And this wasn’t one of those gorgeous weather days or anything, it was the day after a snowstorm, so everything was slushy and icy. It appears Tired Hands were successful at breeding that new, cold-resistant strain of beer nerd. Something about these sour ales aged in barrels seems to really strike a chord with the local coterie of beer dorks.

Given my (sad lack of) experience with Para3, I was overjoyed that my Believer’s Club membership started taking effect with the release of Parageusia4. No waiting in line for me, just a leisurely stop in at the brewery a couple days after the general release. Alas, only a 1 bottle limit, making this a fair rarity and totally worth waiting in line, even if I didn’t have to. It is a 12 month old Cabernet Franc barrel-fermented sour ale, so let’s see what kind of abnormal or hallucinatory tastes pop out: 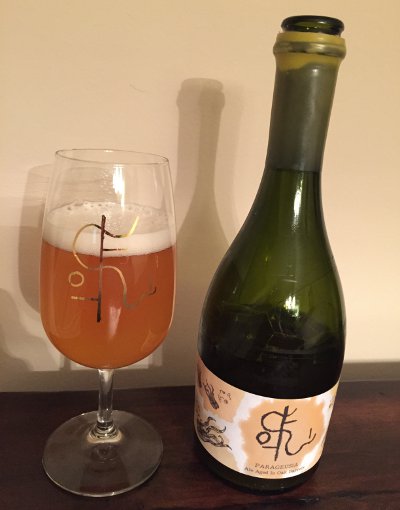 Tired Hands Parageusia4 – Liquid gold in appearance, with a finger of fluffy white head. Smells nice and funky, musky earth and vinous fruit all over the nose. Taste definitely goes more vinous than previous iterations, lots of grape here, a little oak, and a well balanced lactic sourness in the middle to finish. Mouthfeel has decent carbonation, but a little light compared to previous iterations (perhaps more time in bottle would have solved that), light bodied, crisp and refreshing, only a very mild sense of sour acidity here. Overall, it’s another winner, though it doesn’t quite compare to Para1 level awesomeness (but few do!) A-

Will be so happy once the barrel aged wonders they’re making at the new Fermentaria start to come of age in the next several months/year. In the meantime, I’ll just have to cry into regular old top-tier IPAs and saisons. Woe is me.