Fiddlehead was the first stop of Operation Cheddar III: Cheddar Harder and while we struck out on Second Fiddle cans (which we later got to consume in Boston, oddly enough), we did manage to get our hands on some cans of Tejas Marron, a hoppy brown ale brewed with unrefined dark brown sugar, which sounds awfully nice. Not sure what makes it a Texas brown ale (as the name implies) or why the can has Spanish for “The Devil’s Right Hand” included, but who cares – it sounds great: 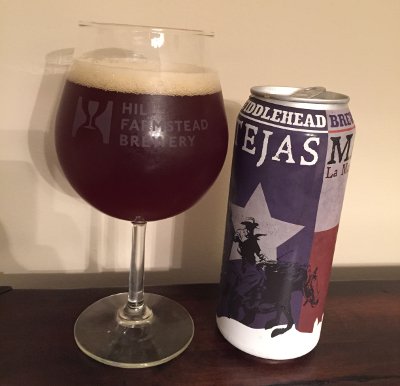 Fiddlehead Tejas Marron – Pours a hazy brown color with a finger of light tan head that sticks around a while. Smells of citrus and pine, maybe hints of brown sugar. Taste is surprisingly tame given the color, some citrus and pine hops again, especially up front, with the brown sugar emerging towards the finish, which seems well balanced between sweet malts and bitter hops. Mouthfeel is well carbonated, on the lower end of medium bodied, not thin at all, but not quite what it appears to be either. It feels a lot like an IPA that has some darker elements incorporated… without getting into stout/black IPA territory. Overall, it’s a rock solid brew, not my favorite thing ever, but I’ll have no hesitation in polishing off the 4 pack! B+

I like this a lot, and I shared a Hodad with a friend a while back which was nice, but it’s still pretty clear that Second Fiddle is the best thing I’ve had from these fellas. That being said, I will certainly be on the lookout for more from them on subsequent Operation Cheddars!