In the dark days of the aughts, The Alchemist was basically an obscure little brewpub that made a name for itself by perfecting IPAs and DIPAs. In 2011, they expanded their operation to a production brewery and cannery… right before Tropical Storm Irene laid waste to the pub. Having just opened the cannery, they opted to just sell cans of Heady Topper for a few years while they recouped their losses. They only made that one beer for a couple years, but I guess you can get away with that when it’s the single highest rated beer on the planet. Nevertheless, The Alchemist certainly had a growing stable of recipes that were languishing in obscurity, and starting last year, they started doing limited runs of some other beers and dialing in the recipes to be scaled up and brewed on their new system.

One such beer was Focal Banger, a 7% ABV American IPA made with copious amounts of Citra and Mosaic hops, yielding a beer that is distinct enough from Heady Topper while retaining the DNA that serves that flagship so well (presumably that Conan yeast in action). The canned runs of this were severely limited last year, and they didn’t even have approval to send them out via traditional distribution channels (they sold them at little pop up events). Well, they recently got their new artwork approved, and started producing proper cans, though distribution is still severely limited. We managed to snag some cans at the Blackback Pub during Operation Cheddar III: Cheddar Harder a couple weeks back (and we were lucky enough to grab another at The Reservoir the next night). According to the bartender, once The Alchemist’s new brewery and retail space opens (presumably next Spring, fingers crossed), production will increase dramatically, and Focal Banger will have similar availability to Heady Topper (and here’s to hoping some other stuff makes its way into the mix as well!) Enough preamble, let’s get to it: 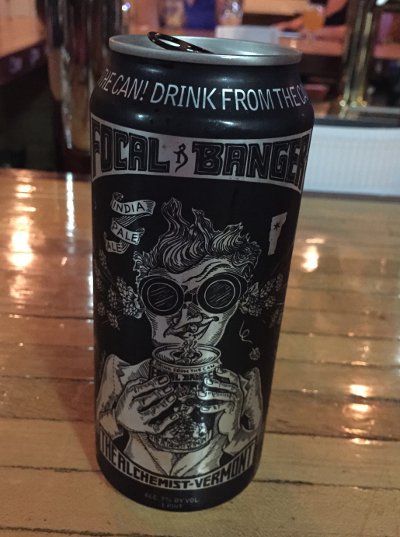 Alchemist Focal Banger – It doesn’t pour because you DRINK IT FROM THE CAN, as ordered (the artwork on the can is beautiful though). Beautiful citrus nose, maybe more tropical than Heady, I keep sticking my nose into the can like a dope (or, come to think of it, like the guy on the can). Taste is hugely citrus, tropical fruits, light bitterness in the finish. The Mosaic hops seem to be dominant here. Citra is no slouch, but it has some more subtle components that tend to fall by the wayside when Mosaic is in play, but then, Mosaic really plays well with that Conan yeast, yielding a really juicy, citrusy feel. Mouthfeel shines, well carbonated, silky smooth, almost creamy, compulsively quaffable. Overall, hot damn, another beautiful Alchemist beer, distinct enough from heady, but in a similar vein… A!

Totally worth trying to track down if you find yourself in Waterbury, but it sounds like we won’t have to wait too long until production ramps up either. Can’t wait to be able to actually bring some of this stuff home. Also hoping that the expansion will also include some of their other brews… would love to try one of their imperial stouts, just to see how they handle that sort of contrast. In the meantime, I’ve got plenty of other Vermont beer to get through, so stay tuned.