The last year has seen many breweries upgrading their facilities and increasing production, often dramatically. Colorado’s Avery brewing is among those ranks, with a new facility, increased production, and a greatly expanded barrel aging program. 2 years ago, they had 250 barrels aging a variety of beers in their warehouse and they’re now at around 2000 barrels. This a welcome development and probably explains how I could get my grubby hands on several of their barrel aged beers over this past year. I’m pretty enamored with those beers, so when this beer, part of a recent trend that’s been dubbed Sour Spring, showed up in my local bottle shop, I took the plunge despite never having had any of their sours before (unless you count the infected Black Tot, I guess).

Tectum Et Elix translates to “roof and grains”, a reference to their new brewing facility. The new building also seems to be the inspiration for the cryptic little description for this beer, number 26 in their barrel aged series: “Conceived in the alley. Born under a roof on Nautilus. Where ‘drain’ isn’t just a noun but finally, once again, a verb as well. FINALLY!” The new brewery is located on Nautilus Court in Boulder, Colorado, so that line is easy to figure out. Presumably there’s an alley next to the building where people hang out and come up with beers or something. And the notion of drain being a verb rather than just a noun is perhaps a reference to draining barrels after a long wait? This beer spent 9 months in Cabernet Sauvignon barrels along with a mix of yeasts and bacterial beasties (apparently straying from their normal Brett strain to experiment with others). Worth the wait? Let’s take a closer look: 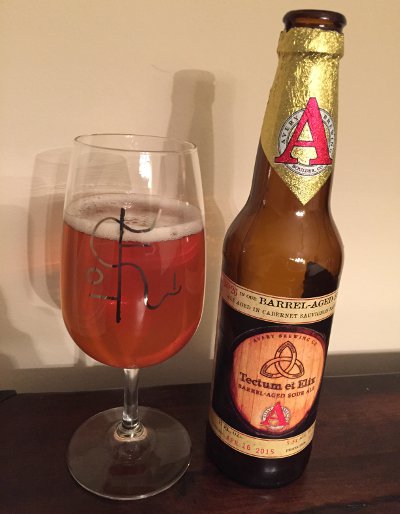 Avery Tectum Et Elix – Pours a clear, golden orange color, radiant with a finger of white head. Smells intensely earthy, lots of funk, hints of fruit, sour cherries, but really earthy, horsey, barnhouse stuff (supposedly due to the use of different Brett strains than normal Avery sours). Taste is more on the fruity side, sour cherries, some earthy funk, sweet fruit, and a little vinegary sourness in the finish. Mouthfeel is well carbonated, crisp, moderately acidic, light bodied. Given that the normal barrel aged Avery beer is somewhere north of 14% ABV, this sucker feels downright approachable at 5.5%… Overall, it’s a nice little sour number, nothing ecstatic, but really very nice and quite tasty and it grew on me as I drank. A-

On deck is Insula Multos Collibus, a sour aged in bourbon barrels with cherries. After that, who knows. The production on these things is way, way up, so I’m sure we’ll see more Avery barrel aged wonders as time goes on. In the meantime, I’ve got my hands full with VT and Boston beer, so it may be a while…