What do you get when you take Logsdon’s already amazing Seizoen Bretta, stick it in oak, and then cram it with 1.5 pounds of peaches for every gallon of beer? You get a gigantor peach singularity that curves spacetime and collapses in on itself such that scientists don’t really know how to measure any of this except to say that it’s delicious. First released in 2012, it quickly achieved walezbro status, disappearing immediately upon subsequent releases. I assume production has been ramped up for the simple reason that I was actually able to get my grubby biscuit snatchers on a bottle, and lo, it was good: 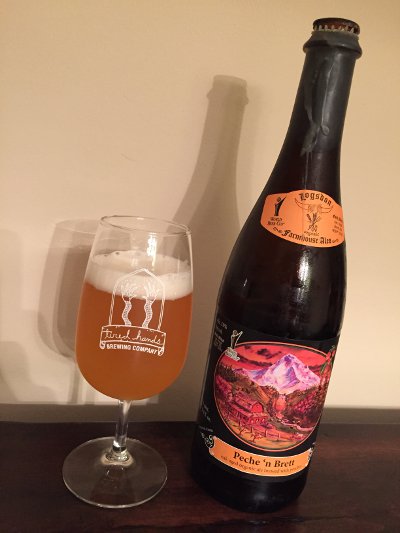 Logsdon Peche ‘n Brett – Pours a radiant yellow gold with a finger of fluffy white head. Smells of pure, juicy peaches. I have never had a beer that had this much peach going on. Sure, there’s some light, musty funk if you look for it, but the aroma is really dominated by those peaches. The taste has a little more balance to it. Still lots of peaches, but you get more of that musty Brett, a little spice, some oak and maybe even a dry tannic quality. Mouthfeel is well carbonated and crisp, medium bodied, perhaps even a bit of boozy heat, but not at all unpleasant. Hot damn, this is a peach bomb. I’ve never had anything quite this intensely peachy. Overall, a pretty fantastic beer and a must for peach lovers. A

While not distributed here, my understanding is that Seizoen Bretta is generally available wherever it is distributed, which is just inconceivable to me. That stuff is absolute nectar of the gods, and you would do well to seek it out by any means possible. As much as I enjoyed Peche ‘n Brett, I can’t help but fall back on Seizoen Bretta as a more regular option. And honestly, everything I’ve had from Logsdon has been pretty fantastic. Indeed, got a couple more in the pipeline, so watch out…