Of the west coast ballers of hoppy beer, Alpine seems to be among the top tier. Hushed tones and angelic choirs, I have been craving their wares for many a moon. I finally managed to snag a bottle in a cross-country trade, and then I find out that they’ve started distributing to Philly. Literally the day after I received this bottle of Duet in the mail, I spy a local beeratorium tapping 3 of their most sought-after beers. It turns out that Green Flash’s recent acquisition of Alpine has translated into more production and wider distribution. Go figure. If this bottle is indicative of the trend, it is a most welcome development!

The Duet in question refers to the two most prominent ingredients of this beer: Amarillo and Simcoe hops. Both are staples of the modern American IPA, but rarely have they been employed in such an efficent and downright delicious fashion. All of Alpine’s labels feature historically significant buildings located in Apline, CA, in this case, we’ve got the Alpine Community Church, truly a great representative of such a heavenly beer: 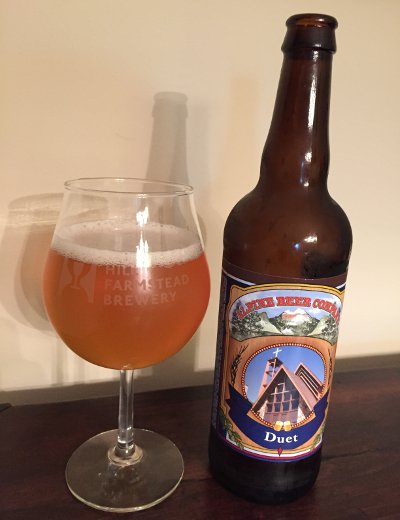 Alpine Duet – Pours a slightly hazy golden yellow color with a finger of fluffy white head. Smells great, lots of citrus, grapefruit, a little mango, some more earthy floral aromas pitching in as well. Taste starts off with a blast of sweet citrus that doesn’t really let up until some light hop bitterness course corrects in the finish. The hop character does get more complex as I drink, what was initially straight citrus gets more floral and maybe piney as it warms up. The bitterness is perfectly matched yielding a fantastic balance that most IPAs do not manage. It’s not a bitter bomb or anything approaching that level of bitterness (definitely less bitter than many beers), but there’s enough there to balance out the citrusy sweet hop and malt backbone. Mouthfeel is well carbonated, crisp, and clean. It is utterly, dangerously quaffable, and perfectly balanced. Overall, this is a superb IPA, delicious, incredibly well balanced, and just phenomenal. A

Naturally, I have another beer on its way: Alpine Nelson. But I may apparently be able to dig up some others locally as well. Naturally, these folks have made a rather fantastic first impression in a pretty competitive category, so I’m looking forward to more.