I’ve been doing a better job keeping up with Forest & Main’s bottle releases lately, in part because they’re such low-pressure affairs. Unlike a Tired Hands release, where you need to arrive at least a couple hours early, I can roll up right around opening time and still snag a bunch of bottles. People do wait in line, but it’s definitely a more relaxed atmosphere and everything moves swiftly once the doors open. Oh yeah, and the beer’s pretty good too.

Two beers at the latest release. One was Paradisaeidae, named after a family of birds known as the Birds of Paradise, a barrel-aged saison brewed with Forest & Main’s local saison yeast, conditioned on lemongrass and lime, and dry hopped with Motueka. I never knew this, but Forest & Main’s saison yeast is foraged from a variety of flowers and fruits growing within a few blocks of the brewpub (“Cultures from mulberries, cherries and honeysuckle made the final cut.”) They switch up the yeast every year, so you can expect significant variations between vintages.

It’s unclear if every saison they make uses this foraged yeast, but the second bottle I snagged, Ash & Alder (presumably a reference to the trees used to make Fender guitar bodies) was a more traditional saison except that it was dry hopped with Mosaic and Mandarina Bavaria. Unlike Paradisaeidae, this is not barrel aged and isn’t really suitable for aging. I’m sure it would do just fine, but judging from the nose on this sucker, you really want to drink it fresh. But I’m getting ahead of myself, let’s take a closer look at both of these beers: 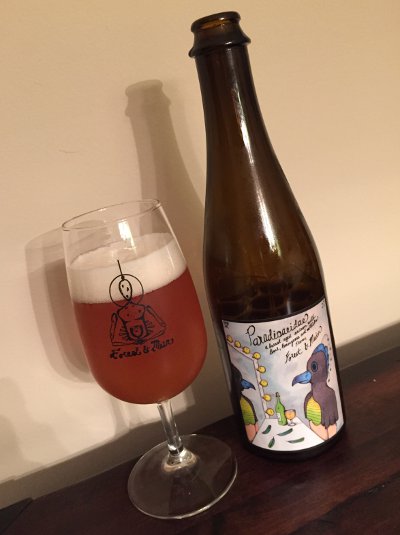 Forest & Main Paradisaeidae – Pours a hazy golden orange color with a finger of dense white head. Smells funky, sour, fruity, with some oak pitching in for good measure. A very well integrated nose, actually. Taste starts off with a sour little snap that quickly subsides as things get earthy in the middle, funk and oak, some fruity hops and hop bitterness emerging in the finish. Mouthfeel is well carbonated, lightbodied, moderate sourness and acidity, a little dryness in the finish. Overall, a nice sour saison, but not quite the equal of some of their other offerings, notably Moeder saison or Marius variants. Still very nice, a solid B+ 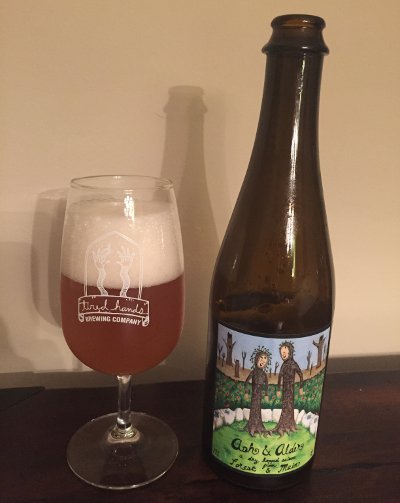 Forest & Main Ash & Alder – Pours a more hazy, slightly darker golden color with tons of fluffy white head. Absolutely beautiful nose, perfect melding of saison spice, fruit, and funk with citrusy hops. Great tropical fruit aromas, oranges and the like. Taste is a little more subdued than the nose would have you believe, and the balance definitely leans more towards the spicy saison up front, with the hops kicking in towards the bitter finish. Mouthfeel is highly carbonated and effervescent, crisp and clean, and very, very dry. Overall, this is one of the better hoppy saisons that I’ve had, well worth checking out when fresh. A high B+

As per usual, solid work from Forest & Main. Always consider heading up there and should really visit more often. I am getting better, I swears.