A most elusive ghost, this is one of a series of seasonal Fantôme offerings based on, uh, the seasons. Insert hoary history lesson about how “Saison” translates to “Season” and was made on farms for the seasonal workers to drink out in the fields or some such. Été is the summer entry, and I don’t believe I’ve ever even seen this one in the states. From what I understand, for whatever reason, it hasn’t seen much distribution over here for several years… until now, apparently. Perhaps their year long bout of smokey latex funk has loosened demand a bit, thus freeing some stock for distribution. And the days of the Smoketôme are long gone, which is good, but does this beer stand up to the celebrated vintages of yore? I think not, but it was still fun to try. But then, Fantôme’s charming lack of consistency is one of my favorite things about them – you never know what you’ll get when you strap on your proton pack and catch some ghosts: 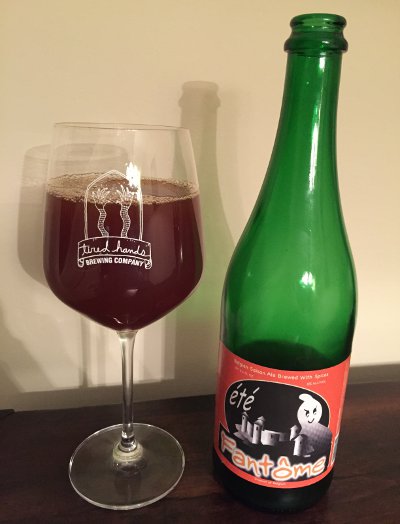 Fantôme Saison D’Erezée – Été – Pours a deep, murky reddish brown color with barely any head at all, just some bubbles from pouring vigorously. The nose is sweet, with some sense of spice (perhaps a faint hint of ginger in the nose – I’m not normally a fan, but it is very light here) and a little bit of that sour twang (not powerful, but it’s there). Taste is mildly sweet, with a fruity kick, light sour cherries, maybe a little fruit by the foot. Mouthfeel is medium to full bodied, almost no carbonation, and quite sticky, especially in the finish. It feels a little under-attenuated and gloopy, but sometimes that sort of thing clears itself up in the bottle. I’d like to try one of this batch in a year and see what’s going on with it. Plus, I know I’m particularly sensitive to carbonation issues, and while this is far from the worst example I’ve had, it’s still too low. Overall, carbonation issue aside, it’s got a nice character to it. Sort of like a fuller bodied but less sour Flanders Red. I actually had no real problem drinking this thing, I just really wish the carbonation was higher. B-

A disappointing tick, but I will forever be intrigued by Fantôme. I have some of the new batch of the standard saison, as well as another specialty that I’ve not tried before.