A hand and seal is basically a notarized signature, an official recognition that a given document is authentic. So this barleywine, brewed in honor of the 20th anniversary of Garrett Oliver’s reign over Brooklyn Brewery, is offically recognized as being awesome. It’s part of Brooklyn’s Quarterly Experiments program, a traditional English style barleywine that has been aged for several months in Four Roses bourbon barrels, and yes, it’s pretty darn good: 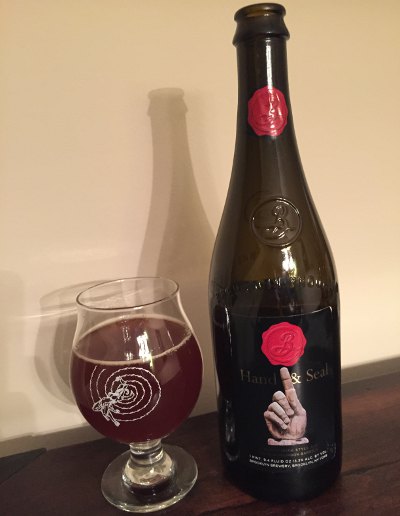 Brooklyn Hand & Seal – Pours a murky light brown color with a cap of short lived head. Nose has a lot of bourbon, maybe some fruity malt as well. Not a particularly strong nose, though. Taste is very nice. Lots of sweetness, rich caramel, toffee, dark fruits, bourbon, vanilla, and oak, all playing nice with one another. Mouthfeel is rich and creamy, moderate carbonation, full bodied, a little boozy and warming alcohol in the belly going on. Overall, we’ve got a very nice sipper of a beer, on style, well balanced and tasty. B+ but it’s high on that scale, perhaps even an A- if I’m more generous.

It’s been a while since I’ve sampled any Brooklyn brews, so this was a nice surprise. I’ve seen some bottles of Cuvee Noire out and about, so perhaps we’ll see those here. Or perhaps not. Only time will tell.