Every year, I grab a sixer of Anchor’s Our Special Ale, their Christmas/New Year’s beer. I drink one or two, and reserve the rest for vertical tastings in the future. This marks the second year in a row where I’ve managed to save 3 years worth of beers for comparison, and the fifth year I’ve been drinking these beers. I also have a lone 2011 bottle that I’m reserving for a larger vertical at some point in the unspecified future (for the record, 2011 hase been my favorite vintage so far, though granted, I’ve only really been following since 2010…) On the other hand according to Anchor’s brewer Bob, I might be hitting the sweet spot right now anyway:

I prefer years one through three myself, depending on the hop and spice profile of the original vintage. Obviously, if there is more hop and spice to begin with, there will be more carryover from year-to-year as the product ages, but by year five they all pretty much taste the same. Not necessarily bad, but not very interesting either.

I did a ten-year vertical tasting of our Christmas Ales once and found that by year seven, they really all did taste the same – and frankly, not very good.

I don’t believe you Bob! In actuality, I do believe that, but I still want to see for myself. In the meantime, I’ll follow Bob’s advice and just look at the last three vintages to see what’s up. 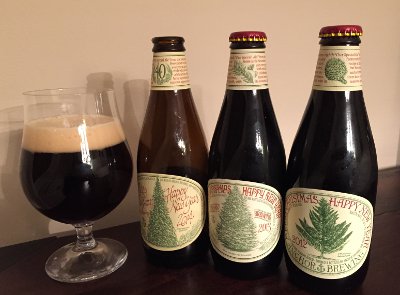 Anchor Our Special Ale 2014 (Anchor Christmas) – Pours a dark brown color with a finger or two of fluffly, light tan head that leaves tons of lacing as I drink. Smells of mulling spices, cinnamon, ginger, maybe a little clove. Taste has a strong malt backbone, almost more like a brown ale than previous years, and those spices are more subtle and well matched as well. As it warms, that toasty, nutty brown ale character comes out a little more, as do the spices. Mouthfeel is medium bodied and well carbonated, with the spice taking hold in the finish. Overall, solid beer, not going to bowl you over, but well crafted and balanced. B+

Anchor Our Special Ale 2013 (Anchor Christmas) – Similar appearance, but a more amber hue to it, with beautiful highlights when held up to light (those are not present in the 2014). Spices more prominent in the nose. It feels like the ginger has taken over here, but the standard retinue of mulling spices are around somewhere. Taste is not quite as deep as the 2014, less of a malt presence, spices again more prominent, with the ginger standing out more here than I remember from last year. Mouthfeel is lighter bodied than 2014. Overall, it’s fine, but I like the 2014 better! B-

Anchor Our Special Ale 2012 (Anchor Christmas) – Very similar to the 2013. Amber highlights, more prominent mulling spice in the nose and taste, though it’s clear that the age is tempering that spice a bit too. The spice seems to have fared better here than the 2013, and retains a certain complexity, but again, age is clearly having an impact here. I suspect the reason the spices feel more prominent in the 2013 and 2012 vintages is that the malt backbone is lighter, which means that the spice stands out more. Once again, I’m left with the 2014 as the best of this lot, but this 2012 is pulling in at number 2 (so age has treated this better than the 2013)… B

Overall, I still think the 2011 has been the best vintage I’ve tried so far, but 2014 took the honors tonight. I also suspect that it will age better than other recent vintages. Next year, I will technically be able to do a 5 year vertical, but I may want to wait a year or two before going too crazy (I should be able to do a 4 year vertical next year and still have enough 2012 to last another year or two). Per Bob, after 5 years, things apparently get samey, but who wants to believe that guy?! Happy Holidays everyone, see you next week!