It’s time for round two of Vermont Roulette, wherein I purchase random Vermont beer that I’ve never heard of, drink it, and see if I survive. While round 1 was not tremendously successful, I did live to play again and this time, I think I’ve stumbled onto something rather good.

I purchased this at the Warren Store, and when I asked the guy about it, he said he hadn’t tried it yet, but that it was brand new and that the brewery really just got started. Looking around ye olde internets reveals that the location has been around for a while, but that distribution is starting to expand. Or something like that. It used to be called The Shed, a pub built on an old youth camp called, yes, Camp Idletyme. The beer itself is a svelt 8% ABV DIPA with what seems like a relatively light malt bill and lots of “new” aroma focused hops. According to the brewer, they’re still experimenting with the dry hop varieties (you know the story, small breweries can have a difficult time contracting for hops, especially the popular ones), but to my mind, they’re on the right track. Good tymes! 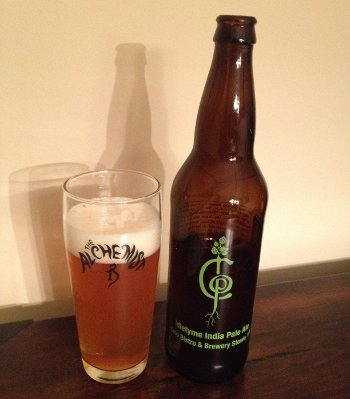 Crop Bistro & Brewery Idletyme IPA – Pours a hazy, pale yellow with just a hint of orange and a couple fingers of fluffy white head that leaves plenty of lacing as I drink. Smells of beautiful citrus hops, juicy and clean. As it warms, a sorta minty aroma arises out of that citrus. The taste has a nice sweetness to it, lots of that bright, juicy, citrus hop character, and only a hint of bitterness on the back end. As it warms, the hops get a little more earthy or herbal, but still bright, like the mint that emerges in the nose. Mouthfeel is reasonably well carbonated, light bodied, bright, crisp, and clean, quaffable. Overall, this is a very pleasant surprise. It’s probably not a Heady Topper killer or anything like that, but it’s a worthy take on the style, for sure. B+

So there you have it, a solid DIPA that’s bound to be underrated due to the gravity well of more famous Vermont beer. Worth a shot if you can find a fresh bottle (I get the impression that this beer would age poorly, even moreso than a lot of other IPAs), and I assume it’s just as good on tap. So an unqualified success for Vermont Roulette. At least one more round coming, another relatively new brewery’s take on an IPA.