We love Hill Farmstead here at Kaedrin, so when we took a slight, uh, 9 hour detour into Vermont to nab some of their prized beers, we availed ourselves of everything we possibly could. While I’m not a particularly huge fan of growlers, I absolutely had to fill up my limit whilst I could. Growlers are not known for their longevity but fortunately, these are beers that do not last long in this household. First up, Harlan, a beer I cracked open for a little scenic drinking just a few hours after returning from my trip. 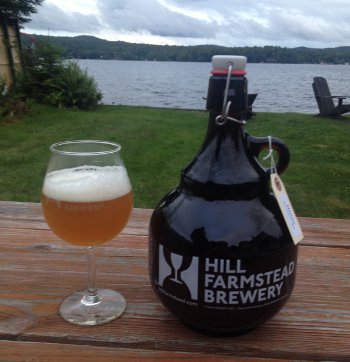 Hill Farmstead Harlan IPA – A slightly bigger version of Edward Pale Ale that is dry hopped with additional Columbus hops. Pours a very pretty, cloudy pale orange color with a couple fingers of fluffy white head. Smells intensely of citrus hops, stone fruits, oranges, and your typical grapefruit notes along with a big dank note that isn’t quite pine (I suspect the pine would be more prominent if this weren’t so fresh). The taste follows the nose with tons of citrus hop flavors and that fresh dankness too. Light malt backbone, but not as bitter as you’d expect from such a hoppy beer. Mouthfeel is perfect, medium bodied, well carbonated, quaffable. Overall, this reminds me a lot of the type of stuff you see at Tired Hands, and I think that speaks well of both breweries. A- 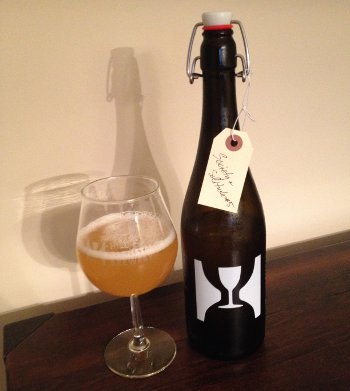 Hill Farmstead Society & Solitude 5 – As of right now, this is the best received entry in this series of experimental DIPAs. This one features a rather fantastic blend of American and New Zealand hops. Pours a murky yellow color with a finger of white head that leaves lacing as I drink. Huge citrus aroma, oranges, tangerines, grapefruit, mangoes, the whole shebang. The taste is dominated by those citrusy hops, with that same melange of tropical fruit notes. It got a well balanced sweetness to it, evened out by hops, but not bitter. Mouthfeel is medium bodied, perfectly carbonated, absolutely quaffable. Overall, a spectacular IPA, the clear winner of this trip so far (and that’s saying something!) A 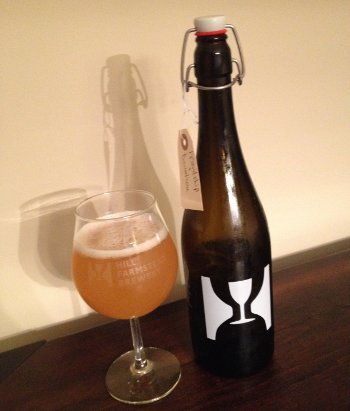 Hill Farmstead Friendship & Devotion – Brewed in collaboration with Luc Bim Lafontaine, formerly of Dieu du Ciel! (and soon to be heading up some sort of special Japanese brewery), this is an IPA that is described as “citrusy, salty IPA with notes of grapefruit”. Pours a very pale orange color with a finger of white head that leaves some lacing as I drink. Again with the big citrus hop aroma, tropical fruit, herbal and grassy notes, but also some sweetness… Taste goes along similar lines, lots of citrus hops, hints of pine in the background, and something else playing around in the middle. HF sez that it’s salty, so maybe that’s what I’m getting, but it’s not like it’s a gose or something – if its salty, it’s tucked into the rest of the flavor profile pretty well. Mouthfeel is medium bodied, well carbonated, and yes, quaffable. Overall, another winner, though perhaps not quite as much as the above two… A-

So there you have it. I’m getting pretty close to exhausting Hill Farmstead’s standard brews. Someday, I may have to fill a growler with something I’ve had before, like Abner. The horror! Already looking forward to it!