This is the first in a series of what I’ll call “Vermont Roulette”, wherein I purchase some random Vermont beer that I’ve never heard of off the shelf and see what happens. In this case, it turns out that the beer is from Massachusetts, but I bought it in Vermont, and it appears to be a rather obscure beer. I didn’t take a picture of it, but the bottle caps were clearly those Brewery’s Best thingies that homebrewers use. I suspect this is a rather small operation. Only 2 reviews on BA, and this Howler Brewery doesn’t even have a website. All the bottle sez is that it’s a pale ale brewed with Nugget and Cascade hops, which, you know, sploosh. But then I opened this sucker and bam, Belgian yeast. Unexpected, but cromulent enough, I suppose: 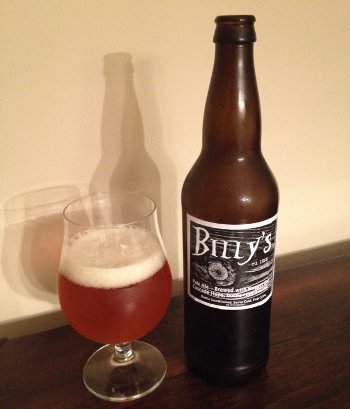 Howler Billy’s Pale Ale – Pours a golden orange color with a finger of white head. Smells… like Belgian yeast, lots of spicy, musty, estery yeast, maybe a hint of those advertised hops. That Belgian yeast follows into the taste, which has a nice spicy character, cloves and the like, and some citrus hop notes melding with the yeast character, some hop bitterness in the finish. Mouthfeel is highly carbonated, medium bodied, and relatively dry. Overall, it’s an unexpected but pretty straightforward Belgian pale ale with just a hint of a hoppy kick. Worth trying, but don’t let that label fool you – this ain’t no straight pale ale. B-

Not an entirely encouraging start to Vermont Roulette, but then, when your points of comparison are Hill Farmstead, The Alchemist, and Lawson’s Finest Liquids, there’s a pretty tough bar to clear. Stay tuned for some more obscure Vermont brews…