When it rains, it pours. No sooner than I got back from my trip to Vermont, a friend got back from her trip bearing tidings of Three Floyds, so now I find myself flush with amazing hoppy beers.

There’s not much out there about this beer other than its 9% ABV, 100 IBU DIPA style. Cimmerians were a real ancient people, having flourished for a few hundred years around 600 BC. It’s rumored that Robert Howard claimed his most famous creation, Conan the Barbarian, was descended from Cimmerians. This certainly fits the axe weilding maniacs and woolly mammoths on the label and is typical of Three Floyds’ branding, so let’s crush our enemies, see them driven before us, and hear the lamentations of their women. Oh, and drink their beer: 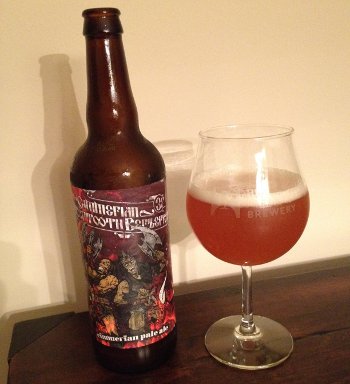 Three Floyds Cimmerian Sabertooth Berzerker – Pours a murky orange color with a finger of off white head that sticks around a while and leaves some lacing as I drink. Smells of big citrus and dank pine, with some sort of “green” hops as well, and even a little crystal malt caramel or maybe even toffee. Taste is very sweet, with that rich toffee and caramel from the nose coming through strongly. Dank, resinous hops with just a bit of citrus character come in the middle and balance out all that sweetness in the finish. Mouthfeel is well carbonated, medium bodied, a bit sticky. Overall, it’s a big DIPA with enough malt presence to put this in strong ale or maybe even barleywine territory with just a few tweaks. Regardless, I’m enjoying it greatly. B+

Certainly not my favorite Three Floyds DIPA, but then, they apparently have a ton of them, and you’ll be seeing some more of them in the coming weeks. Stay tuned.