If you’re going to try and decode Tired Hands beer names, one place to start would be familiarizing yourself with Kurt Vonnegut. This reference, at least, is a straightforward one from Vonnegut’s most famous novel, Slaughterhouse-Five. It’s a refrain that occurs frequently throughout the novel (like, over 100 times), usually associated with death or mortality in some way.

The beer bills itself as a Pennsylvania Sour Red Ale, brewed with a plethora of specialty malts, then aged in a variety of barrels for ten months. This calls to mind Flanders Red ales, but is definitely asserting its own identity (thus falling into that nebulous American Wild Ale designation). The minimalist label is actually rather eye catching, and I waited in line a couple hours to get ahold of two bottles of the stuff. That’s a long time, but so it goes… 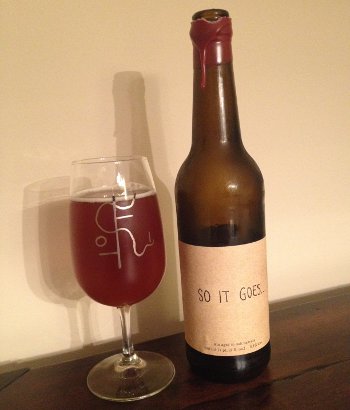 Tired Hands So It Goes… – Pours a really rather pretty dark orange amber color with half a finger of white head that sticks around a bit. It looks like a lighter, brighter Flanders Red. Smells of vinous fruit, cherries, oak, and a nice acetic sour twang. The taste hits similar notes, vinous fruit and cherries are there, but not as strongly as in the nose. It’s not as sweet as I typically expect from a beer like this, but it’s not really bitter at all either. The oak is doing its thing throughout, and there’s a nice puckering sourness that emerges in the middle and lasts through the finish. Mouthfeel is well carbonated, and on the lighter end of medium bodied (lighter than expected). Plenty of acidity to go along with that sourness, but it’s not overwhelming or anything. Overall, it’s becoming impossible to grade all these Tired Hands sours, because they’ve really been killing it with their recent sours (particularly the Emptiness series beers and those Parageusia beers). This is an A-, but on the lower end of their bottled sours.

Mark your calendars beer nerds, Parageusia1 release on Sunday. Totally worth the effort, and it looks like it’ll be a nice day. See you there.