I remember when Prairie first started showing up in the Philly area, but for whatever reason, I didn’t pounce on what I saw, and then they were gone and I haven’t seen as much from that point on. Then everyone starts going crazy over these guys, and to be sure, stuff like Bomb! certainly sounds amazing (and it’s not like that was on shelves here, at least not that I saw). I got my hands on a bunch of stuff from them through a BIF, and they were all fine to good, maybe even very good, but not quite the mind-blowers that I’d been lead to believe… but then, I wasn’t drinking the same beers as everyone else. Major farmhouse envy over here, despite the fact that I’m pretty much drowning in great saisons these days. So when I saw a bottle of this Puncheon stuff at a local beeratorium, I immediately bought it and was rewarded with my favorite Prairie yet. Still not quite a revelation, but a rock solid funk machine (and really, what else do you want): 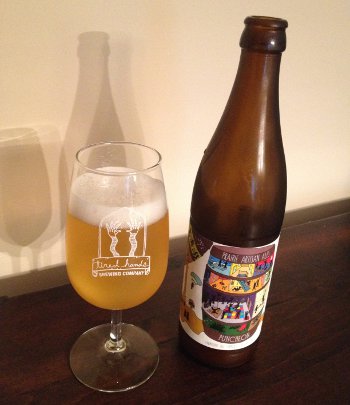 Prairie Puncheon – Pours a hazy straw yellow color with ample carbonation and a finger or two of fluffy white head. Smells fantastic, beautiful funky, musty aroma, fruity, almost vinous, spicy, maybe even hints of oak. The taste seems more substantial than the nose was indicating, sweet, but with enough earthy funk to counter that, and indeed, that earthy, mineral character is much more prominent here than in the nose. Lots of funky stuff going on in the middle and finish as well, with some of that fruitiness coming out, and a little spice too. Not sour, but could perhaps have gone that way (and would possibly be better for it, *hint*), though it’s still tasty in its own right. As it warms, it gets closer to lemon territory, but again, not sour… Mouthfeel is well carbonated, medium bodied, a little spice, and just a bit of a kick on the back end from that funk. Overall, this is a rock solid Brett dosed saison. It’s borderline, but I’m feeling generous, so an A- it is.

So I’m pretty well looking forward to trying more Prairie ales, though I don’t really have any on deck right now either. Someday, I may get off my arse and start trading for the likes of Bomb!, but that’s not going to be anytime soon.