The Lost Abbey always has fantastic events during Philly Beer Week, but due to a variety of factors (general listlessness, apathy, and the fact that I have a job), I can never seem to get there. So I missed out on coveted pours of Cuvee de Tomme and Duck Duck Gooze, but managed to snag a few interesting bottles, including this Framboise De Amarosa.

The base for this beer is Lost Abbey’s standard Lost & Found ale, a dubbel brewed with raisins. Take that, add in an ample dose of raspberries, and age in oak (Tomme sez it’s a blend of 9 and 12 month old beer), and you’ve got something that sounds rather spectacular. It’s named after Amorosa, a biblical reference to a courtesan… which reminds me of Cantillon’s rather risque label on Rosé De Gambrinus. Are raspberries associated with loose women, or is this just a cheeky coincidence? 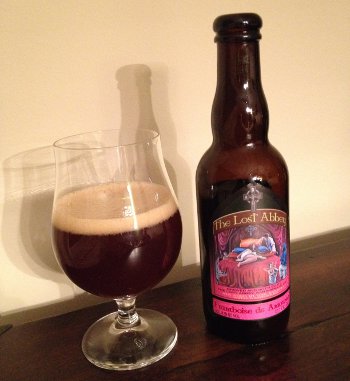 Lost Abbey Framboise De Amarosa – Pours a dark red color with a finger of head that sticks around for a bit. The aroma is full of rasperberries, some oak and vanilla, but raspberiies rule the day. The taste follows the nose, a nice, intense raspberry sweetness with plenty of balancing oak and vanilla. Really delicious. Mouthfeel is also well balanced, well carbonated, nowhere near as acidic as a lot of intense sours, but it’s there too. Overall, this is a fantastic raspberry beer, intense and complex, but not overpowering. A-

Another winner from Lost Abbey, and I’ve got a bottle of Agave Maria standing in the wings as well. Look for a review of that tequila barrel aged sucker soon enough…