It’s been over a year, but I’m still mining some black gold out of Voodoo’s Barrel Room Collection. It’s been a generally successful venture, and I’m happy I waited in line for the privilege of buying these beers.

Sidebar! According to wikipedia, there are many things that “black gold” could be referring to. The obvious one, for all you hillbillies out there, is crude oil (Texas tea!). Along similar and unsurprising lines would be coal. A little more unexpected: black pepper. It turns out that at one time, this was prized, rare, and compact enough to be universally accepted as payment (a commodity money). More unexpected would be Marmite, that salty yeast extract that’s used as a food spread in the Anglosphere. This one seems to be a relatively new coinage, linked to a recent shortage (dubbed the Marmageddon). Finally, we have coffee, which is a little dubious, but you all know my feelings on coffee at this point.

Well, I think Bourbon barrel imperial stouts should probably be added to the list of substances that qualify as black gold. And this one is certainly worthy of the label, if not quite as spectacular as its Pappy aged sibling. So prep your cauldrons and consult your Defense Against the Dark Arts textbook, it’s time to drink some Black Magick potions: 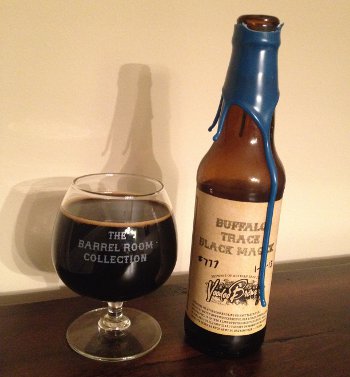 Buffalo Trace Black Magick – Pours a deep, dark brown, almost black color with a cap of light brown head. Smells fantastic, huge bourbon character, some caramel, lots of vanilla, and plenty of oak. Taste is full of rich caramel, bourbon, vanilla, and oak, tons of sugary sweetness, and some char and roasted malt notes emerging towards the finish. Maybe a bit of booze as it warms up as well. Mouthfeel is full bodied, rich, smooth, and chewy. Not oppressively huge, but there’s a decently hot booze character. Overall, it’s a fantastic barrel aged stout, certainly a worthy take on a crowded style, though clearly not the pinnacle. This might be the beer’s age speaking, and next time, I shall have to drink these suckers with more haste. A-

Alas, my Barrel Room Collection stash is dwindling, only a pair Lairds Apple Brandy barrel aged stouts left. Look for those reviews soon enough. It looks like their next barrel room collection release is TBD, but they posted a new picture on their site. Alas, the barrels are not labeled. And if the last couple batches were any indication, these things sit for quite a while in the barrel before being released. Still, we are coming up on about a year since the last release, so there is that… Here’s to hoping they have another Philly release. Otherwise, a 5 hour drive might be a bit much to undertake.