Like any good craft brewery, the fine folks at Tired Hands like to collaborate. These often show up at the brewpub (and presumably at the collaborator’s brewery), but a couple of recent instances involved Jean traveling to Europe and working with various kindred spirits to produce some stuff that would be bottled and then imported. I’ve totally been slacking on these, so I figured it was time to catch up with them. 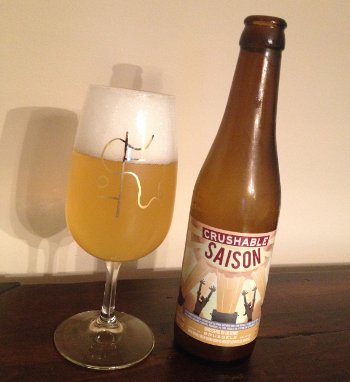 Brasserie de la Senne and Tired Hands Crushable Saison – This was basically a hoppy saison. Pours a cloudy but bright straw yellow color (very typical of Tired Hands) with huge amounts of fluffy, bubbly head that sticks around for a while and leaves lots of lacing (perhaps not as common for Tired Hands – they tend to be lighter in carbonation than this appears). Smells of grassy citrus hops (I get some standard Euro hop feel here, but also some straightforward American hops, like Cascade or Simcoe or something like that), some light peppery yeast, clove, and a little fruity kick too. The taste features a similar quality, lots of Belgian yeast character, very light spicy notes (pepper and clove), hints of fruity esters, and some grassy citrus hops (maybe a bit of hop bitterness in the finish). Mouthfeel is highly carbonated and effervescent, very light body on this, and it is super dry. Given the name, I think they’ve achieved their goal though: it’s super quaffable and yes, emminently crushable. Overall, this is a nice, delicate, quaffable saison. It’s not going to light the world on fire, but I could drink a couple gallons of this stuff, which, seems to be what they were going for. It’s not a glamorous face melter, but it’s the sort of thing you could probably expect to be pouring at the brewpub on most visits. B+ 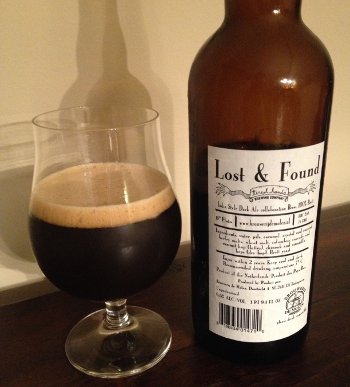 De Molen and Tired Hands Lost & Found – Check out these pics of Jean and Menno grooving at the De Molen brewery. This is a hoppy black ale fermented with 100% Brett. I can’t tell if oak was involved, but I didn’t really get much oak out of the taste. Pours a turbid brown color with a finger of tan head. Smells of Brett funk, a little fruity, citrus and pine hops (maybe a little faded, yielding more piney notes), with some dark malt presence and a hint of tartness. The taste has more of that tart fruitiness, and that dark malt character comes on much stronger. Some earthy funk too. The hops seem a little lost in the taste, or at least not as harmonious as in the nose. Mouthfeel is really strange, grainy, a little astringency from that tartness, medium carbonation, medium body. Overall, there’s some nice elements here, but the balance is a little off, and the disparate elements don’t really come together as well as I’d hoped. It’s not unpleasant or anything, but it was a little disappointing. B-

Both are imported by Shelton Brothers, so they should be out and about. Of the two, I’d recommend Crushable Saison much more, as it’s more representative of their style… and cheaper too! That being said, if you are ever in the Philly area, it’s worth making the detour out to Ardmore to visit the brewpub (but given my general enthusiasm for Tired Hands on this here blog, I probably don’t need to tell you that).