Ensconced in the loving cocoon of craft beer, it’s easy to forget that the grand majority of beer that is consumed out in the real world is mass-produced, industrial adjunct lagers. People suck that stuff down like it’s water. It’s easy to turn up our noses at a low ABV beer that has the gall to use flavorless adjuncts like rice and corn, but those beers have their place, and it’s not like a “cheap” malt bill like that can’t make for a great beer.

Enter Stillwater Premium, their reconstructed “Post Prohibition” style ale. The malt bill and hop schedule are absolutely pedestrian (Pilsner malt, corn, and rice, hopped with Cluster, Northern Brewer, and Saaz), but fans of Stillwater know what’s coming next: farmhouse yeast and 3 strains of Brettanomyces to add a little funk to the proceedings. These were originally released in bottles, but the goal was to get them into cans for that easy drinking lawnmower market. Alas, despite a successful “hand canned” batch of Premium, brewer Brian Strumke ran into a classic blunder of Gypsy brewing: “finding a facility that would not only brew with Brett, but also run it through the canning line, for obvious cross contamination risks.”

Premium remains in bottles, but Strumke took the same recipe, removed the Brett and added some Cascade hops to make up the difference, and called it Classique – a sorta Belgian interpretation of the classic American adjunct beer. Slap some typically awesome Stillwater artwork featuring a mustachioed man wearing an eyepatch (presumably a play on National Bohemian’s cartoon logo, notable since the old National brewery is right across the street from Stillwater’s bar), and you’ve got yourself a go-to table beer.

Update: In a grievous oversight, I neglected to mention that this also makes a great go-to shotgunning beer. I was never any good at that sort of thing, but Beerbecue has the goods. 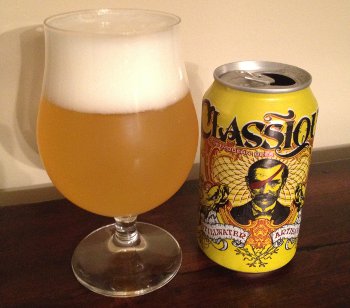 Stillwater Classique – Pours a cloudy straw yellow color with loads of billowy head that leaves thick lacing as I drink. Smell is all Belgian yeast, peppery spice, banana and pear and the like, even some fruity and herbal hop notes. Taste also strays to the spicy side, but the fruit is there aplenty. Mouthfeel is very well carbonated, light bodied, crisp, refreshing, a little dry, utterly crushable. It’s tasty, but not so intense that you couldn’t take down a few of these in one session. Overall, fantastic table beer, worthy of repeat drinking… B+

So this is a great go-to beer, and rumor has it that there will be a Classique Noir someday (presumably a darker take on the same beer). As per usual, Stillwater is always worth trying for us farmhouse fans…