So there’s this hoary old tale about the origins of the IPA style being that beers couldn’t survive the trip to India without being highly hopped. There appears to be a nugget of truth to this, though there are lots of details that trip up all but the most wonky of history nerds. I’m not such a nerd, so don’t break my legs, but the general idea is that a beer will require extra hops if it is being exported to warmer climates.

These days, with our fancy refrigeration devices, it doesn’t really matter anymore, but that doesn’t stop folks from doing wacky experiments like this one, where Cigar City gets their friends in Puerto Rico to brew up some IPA, then send it on a boat back to Florida in order to be canned. During the trip, this IPA is dry hopped with a single hop variety. Each batch uses a different variety, ranging from the heaven-sent Citra (I never got to try this one, but it has great ratings) to experimental hops (which I didn’t particularly love, but it was fine). What we have here is Calypso, a relatively new American hop that’s supposed to have some stone fruit character but also an earthy, tea-like note. We’ll see about that: 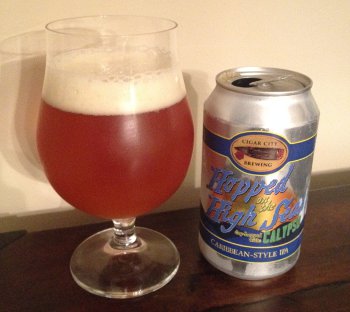 Cigar City Hopped on the High Seas (Calypso) – Pours a cloudy golden orange color with a solid finger of fluffy white head. Smells of citrus and earthy hops, pretty straightforward. Taste has a decent malt backbone, but the hops do not come through as much in the flavor, excepting the bitterness which does hit pretty strong towards the finish. Mouthfeel is low to medium bodied, well carbonated, relatively dry. Overall, a fairly pedestrian IPA… B-

So I’ve had two different varieties of this beer, and I didn’t really enjoy either of them. I suppose I may grab a Citra if they make that again, but if I’m really in the mood for a Cigar City IPA, it’s hard to beat Jai Alai (and its variants).