With the drinking of this beer, I have officially depleted the remaining spoils of Operation Cheddar. It may seem odd to say that, seeing as though Operation Cheddar was an incursion into Vermont and The Bruery is about as far away from that fine state as you can get, but it turns out that Hill Farmstead usually features bottles from their friends, and this was the one available when I was there last year (incidentally, the current guest offerings at the retail shop are numerous and impressive, and that’s before you get to the Bourbon Barrel Aged Maple Syrup! I need to get back up there.)

The only thing I knew about this before I bought it was that it was a Bruery beer that I had never seen around the Philly area. Once I got my greedy paws on the bottle, I saw that it was a sour blonde ale aged in barrels with cherries, basically their take on a Belgian kriek. I assume this “sour blonde ale” is the same base they use for Rueuze and other fruited variants like Filmishmish and Beauregarde, though that is pure speculation on my part, meaning that you can safely IGNORE ME!

Sans Pagaie translates to “without a paddle”, and the bottle itself sez: “Up a Kriek”. I see what they did there. Let’s see what I did this past weekend: 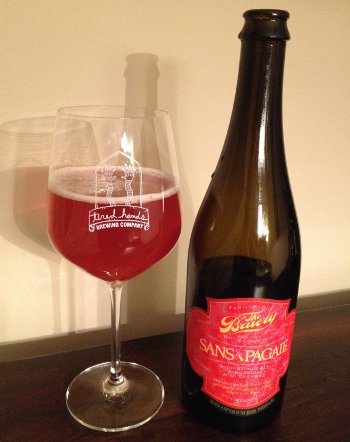 The Bruery Sans Pagaie – Pours an almost clear orange pinkish red color with a finger of off white head. Smell is beautiful, lots of oak, vanilla, cherries, tart fruit, and some light earthy funk. Taste starts off with some tart fruit, cherries, more fruit roll-up than sour patch kid (though both seem present), followed by an intensifying sourness into an oaky, sour finish. Mouthfeel is medium bodied, well carbonated, acidic, vinegary, intense (but not Avance-level intense), quite the pucker factor. Definitely an interesting and worthwhile beer, the fruit lends a sorta sugary candy character that sets this apart from the really awesome Belgian takes, but this works well enough on its own. B+

Among Bruery’s attempts at Belgian sours, this doesn’t quite hit Rueuze or even Oude Tart levels, but it is interesting on its own. Fortunately, the next Bruery beer we plan to tackle here at Kaedrin will probably be their upcoming anniversary beer, called Sucré (shit, has it really been 6 years since the Bruery started?)

2 thoughts on “The Bruery Sans Pagaie”