France is clearly more enamored with wine than beer, but seeing as though they share a border with Belgium, it’s not a surprise that French-inspired beers tend to share that rustic farmhouse quality. Supposedly there has been a recent proliferation of smaller breweries making interesting stuff, though I have no real experience with that. And it’s not like today’s beer is actually from France, though it was made with some strains of French saison yeast (in Erie, PA). It’s got wheat and rye in the grain bill, IPA sized American hop additions, and it clocks in at a rather hefty 11.5% ABV. So it’s appropriately weird enough to call it a saison. Oh, and this particular batch was aged in 30 year old rum barrels from Jamiaca. The bottle mentions nothing of this treatment , but the waxed cap (and, uh, the guy at the bottle shop) gave it away. I’ve seen mixed results from barrel aged Belgian styles, but this one seems hefty enough to take on the added complexity without getting overwhelmed. Only one way to find out: 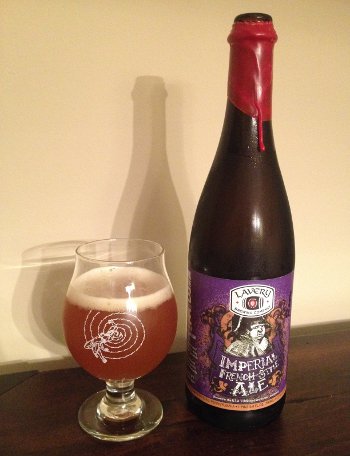 Lavery Rum Barrel Aged Imperial French Ale – Pours a murky, turbid golden brown color with a finger or two of large bubbled head that nevertheless manages to stick around for a bit. Smell has a lot of what I’d call Belgian yeast character (or is that French yeast?), spicy and fruity, but also a rich element of booze, presumably the rum and oak coming through. And yes, that rum comes through very strongly in the taste, rich caramel and oak, with tons of rummy booze, especially in the finish. Some general spicy fruity yeast characteristics also come through in the middle, but this is clearly a rum bomb. Mouthfeel is rich, nearly full bodied, and very, very boozy. Lots of alcohol heat from that rum. Overall, what we have here is a pretty unbalanced brew. That rum and barrel character come through well and I like that about it, but it’s perhaps a bit too hot for its own good (the base is perhaps a bit too dry to really stand up to the barrel). Still a worthy and interesting brew, I’ve not really had anything like this before… B

Lavery continues to be an interesting little brewery, and I’d love to try some more from their barrel program… and I’ll probably grab a bottle of Liopard Oir next time I see it.