This is labeled as a Burgundy Sour Ale Aged in Oak Barrels, and digging into matters, I see that batch 1 was a blend of beers aged in French Oak barrels, some for 2 years, some for 1.5 years (I assume this bottle of batch 2 had a similar provenance). Were these old Burgundy wine barrels? Or is the Burgundy just a reference to the color? Perhaps a take on the Flanders Red style? Maybe I should just drink this stuff and worry about it later? But it is later, what now?

Interesting (or lame and pedantic, take your pick) sidebar, I recently saw something that claimed the Flanders Red style was known as the “Burgundy of Beer”. Given the above conundrum about why this beer is called a Burgundy Ale, I thought I should check this out. After an exhaustive 2 minute search, I found that the Burgundy of Beer could be: the beers of Bavaria, dubbels, Lambic/Geuze, and yes, Flanders Reds (with Rodenbach Grand Cru generally garnering the title). There’s probably a case to be made for all of these (some better than others), but seeing as though I have no real experience with Burgundy wine, I’ll just not assume what I heard on the internets is true.

Once again, I’ve fallen down on the job of emailing brewers and asking pedantic questions that have no real relevance other than the fact that I really enjoy these beers and don’t want to rely on internet hearsay. But the show must go on, and here we’ve got another solid brew from our friends in Denver: 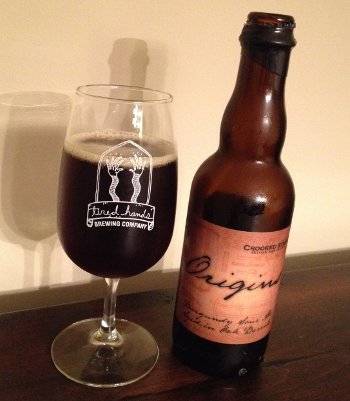 Crooked Stave Origins – Pours a deep, dark amber color, almost brown (dare I say: burgundy), with a finger of off white head. The nose is beautiful, lots of oak, vinegary sour twang, vinous fruits, cherries, and the like. The taste follows the nose. Lots of vinous fruits, tart berries, and cherries, some light oak and vanilla, and a nice, tart sourness that is bracing but doesn’t overpower. Mouthfeel is surprisingly light on its feet, not as big as expected but there’s enough substance to hold the sourness in check, well carbonated, a little acidity playing at the edges of my mouth. Overall, this is a very good, maybe even great sour. Teetering on the border with B+, but I’m feeling generous so we’ll go A-

Not quite a world beater, but it’s close, and some of the variants sound absolutely wonderful (Cherry Origins anyone?) Jay has recently sworn off sours and the likes of Cantillon and Crooked Stave, which is liable to get him branded a monster in some circles, but me, I’m just happy there’ll be more of this stuff to go around.