This beer originated when a transporter malfunction sent bottles of Mirror Pond Pale Ale into an alternate universe where it was revealed to be more like a double batch of that staple beer that was partially aged in Oregonian Pinot Noir, Tempranillo, and Malbec Barrels. Also, the Federation is an evil empire, Kirk is a dictator, and Spock is a pirate (with a goatee!) Wait, I seem to have mixed this up. I was supposed to make a Snow White reference and not let my true nerd flag fly. Oh well, what are you going to do? Ok, stop that. This is why we can’t have nice things.

Um, yeah, so this is the third time this beer has been released, and the previous edition in 2009 had some infection issues. Fortunately, this new batch appears to be sound, and I’ve had a hankering for a good barleywine of late, so let’s trek into this sucker: 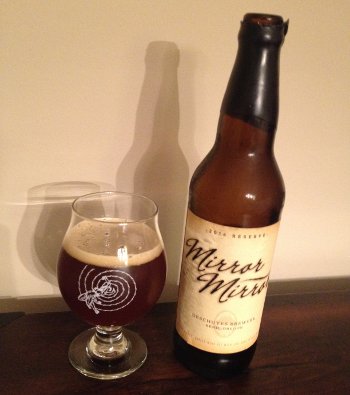 Deschutes Mirror Mirror 2014 Reserve – Pours a deep, dark amber brown color with a finger of light tan head that disapates slowly but surely. Smell is pure barleywine, lots of dark vinous fruit aromas, rich caramel, and maybe a hint of oak. Taste hits with lots of that rich caramel, maybe some of that oak in the middle, less fruit than the nose, but it’s there and it comes through more in the finish, which also has a bitter note to it to even things out. That fruit takes on a more vinous, tannic feel as it warms, but it also develops a bit of a boozy bite as well. Mouthfeel is rich, creamy, low but appropriate carbonation, not quite full bodied, but the richness and booze keep it in the realm of a sipping beer. Overall, this is a well executed barleywine worthy of a look. B+

Dammit, I forgot about those stupid “Best After” dates. I was going to say that while this is really good, it’s not a transcendent experience or anything, but I could see this aging really well. Alas, I doubt I’ll snag another bottle of the stuff, but I guess you never know.