Another day, another barrel aged imperial stout, only this time the barrel aging only accounts for 40% of the finished beer (with the remaining 60% being freshly brewed). I’ve pondered the mysteries of barrel aging on many occasions in the past, and this represents a bit of a wrinkle in the typical formula. Obviously you can’t just take any old beer, throw it in a barrel for a while, and expect great results. But on the other hand, is a 40% blend enough to really bring that barrel presence? Or are you just looking for a hint of complexity rather than a sledge hammer of booze and oak? Is it a way to incorporate barrel character, but still have a high yield in finished product (i.e. the lower the BA percentage, the less barrels you need)? Deschutes also seems partial to these partial barrel aged brews, with the recently covered Mirror Mirror and The Abyss both incorporating some barreled beer into their respective blends. I think I feel a pedantic email spree coming on. If only I had the foresight to do this earlier, I could be reporting actual information here rather than hearsay and speculation. Instead, I’ll just let you in on this rather solid imperial stout: 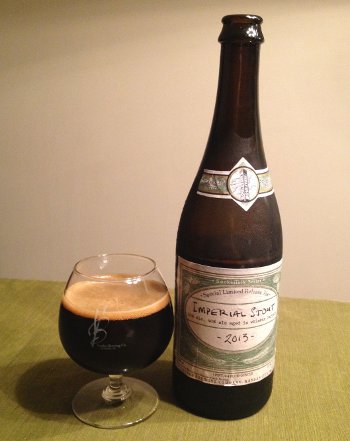 Boulevard Imperial Stout – Pours a deep, dark black color with a little less than a finger of brown head, very pretty stout here. Smell has some roast up front, but it quickly yields caramel, oak, vanilla, whiskey, and maybe even something approaching a fruity note. Taste has a well matched roasted malt character that doesn’t get lost at all in all the caramel, oak, vanilla, and whiskey that joins the party in the middle. The barrel character adds complexity without dominating the taste, though this base beer could clearly stand up to such a full bore barrel treatment (and I would honestly love to try that). Mouthfeel is full bodied, rich, and chewy, well carbonated, smooth, a little bit of boozy heat. Overall, a very well crafted Imperial Stout with a little barrel complexity for extra crunchy goodness. A-

Another solid effort from the Smokestack Series, I am still hoping to snag a bottle of Saison Brett one of these days, but it always seems to elude me… Someday, it will be mine.