Good news everyone! After three long weeks of primary fermentation, I transferred my barleywine to secondary yesterday. Fermentation was vigorous and I’m glad I used the blowoff tube, but it never quite reached the near catastrophic levels of the initial RIS fermentation (I was seriously worried that my fermenter would pop its top, and it probably would have if I didn’t keep such a close eye on it). What’s more, I did seem to get a really good, high attenuation ferment here.

Final Gravity was 11.6 Bx or about 1.017. This is a little lower than the goal, but that was expected given that my OG was a little lower than my target as well. High attenuation, as planned, but it should still have plenty of body. This should put us in 10.1% ABV range, which may very well be the highest ABV beer I’ve managed yet.

As planned, I split the batch into two secondary fermenters: 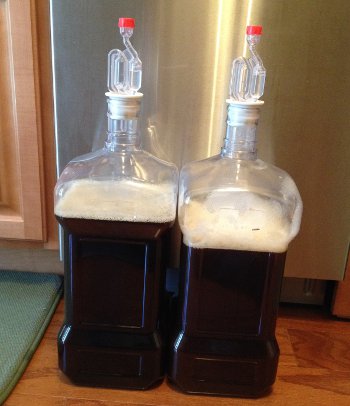 As you can see, the one on the right did not quite reach the full 2.5 gallon mark, so that will be the “regular” version. The one on the left got the bourbon soaked oak cubes. I used Eagle Rare 10 and this time around, I made sure to soak the oak in bourbon for a much longer period (about 3-4 months), which seemed to result in a much darker liquid: 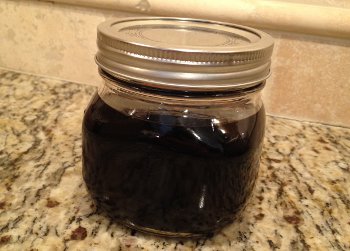 I used 2 ounces of Hungarian oak this time, which is supposed to be a little more mild than American oak, but more potent than French oak. It was medium char, but from what I can tell, it felt a lot less like a campfire than the American oak I used previously. The plan is to let this sit on oak for around 3 weeks, then bottle some from each fermenter, and a blend of the two treatments. I am greatly looking forward to it, while I believe the RIS turned out well, I think this one will be more refined. But only time will tell.

I still have not really decided what I’ll brew next, but I’m definitely hoping to get one more batch in before it gets too hot around here. Right now I’m thinking of a 4ish percent ABV pale ale, highly drinkable. I might even use something akin to the recipe I used for the Earl Grey beer, just without the tea and using American hops instead of the British ones. Or, if I’m lazy and it does get too hot around here, maybe I’ll hit up a saison recipe instead. More to come.