This is a beer blog, but as explained recently, I’m going to be spending some time getting to know other beverages. So far, I’ve covered Bourbon and Port Wine, both of which I’m reasonably familiar with. What’s more, they are both reasonably approachable in terms of what they are and what is available. Last weekend, I pulled the cork on a few wines, which is probably the subject I’m least familiar with. It’s not like I’ve never had wine before or anything, but I’ve never really nerded out on wine the way I have on beer, and looking at it now, it’s a bit overwhelming.

To drastically simplify Bourbon, it’s all about the malt bill and age. Port Wine has elements of terroir and grape selection, but is also very much about the aging process. Wine appears to be all about the grapes and the terroir. As a beer guy, Bourbon and Port Wine are approachable, but Wine’s focus on terroir is somewhat new territory. To be sure, there is terroir involved in beer, most notably with hops. Once again I find myself reaching for a simplification, but if you plant the same hop in different places, you will get slightly different results, and the terroir matters too (a good year in the US Pacific Northwest may not be very good for UK or Czech Republic or New Zealand). Indeed, a couple years ago Victory planned an event called Terroir des Tettnangs, wherein they took their Braumeister Pils recipe and made five batches using German Tettnang hops. The only variable that changed in each of the five batches: the specific field in which the hops were grown. I had a couple of these and, sure, there were not dramatic differences, but there were differences. And one only need look at the US focus on citrus and pine hops, as compared to the more woodsy, earthy, herbal, spicy hops of Europe or the juicy tropical fruit notes in New Zealand and Australian hops (again, dramatic simplification here).

So the concept isn’t completely foreign to me, but it is still something of a mystery. What I know about this particular wine is that it comes from the Napa Valley (and it looks like Aviary contracted out to several vinyards for the grapes – the contract brewer of the wine world?) and uses the Chardonnay grape variety, which appears to be nearly ubiquitous. According to their website, 2012 was a good year weather-wise in Napa, and this was aged for 5 months on oak. I picked it mostly on a whim, only noting that it’s a current Chairman’s Selection in PA (I guess the PLCB does some things right, as these are apparently pretty good deals). I could certainly see myself getting into wine at some point, but given the depth and breadth of selection (all those grapes and geographies and vintages!) I think it would take me a while to get up to speed in terms of true nerdery. On the other hand, perhaps I don’t need to geek out on everything I’ve ever drank. For now, let’s drink some wine: 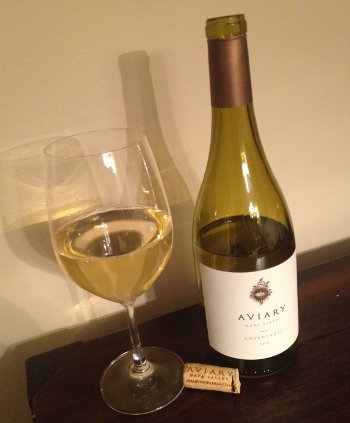 Aviary Chardonnay 2012 – Pours a very light, crystal clear yellow color. Smells of vinous fruit, pears, and the like, maybe some vanilla. Taste starts off sweet, quickly moves into a fruity realm, pears, banana, grapes and the like. I don’t get oak, though from what I understand, that’s a good thing. On the other hand, I do get a hint of vanilla here, which may very well be from that oak aging. Mouthfeel is light and refreshing, bright, maybe a hint of richness, but on the dryer side in the finish. Overall, it’s a nice, solid white wine (sez the beer guy). I probably shouldn’t be rating these things, but hey, let’s give it a B

Food Pairing: The other thing people always talk about with wine is pairing it with food. I know the general rule of thumb is white wine with fish, red wine with meat, but I’m sure that’s dumbed down for the likes of me. Still, I drank this with a meal of sushi and it worked really well, with one possible exception. Nothing dramatically bad, mind you, but Eel (Unagi) was maybe not the perfect match. Eel comes grilled, and it’s a fatty, rich fish, you might even say meaty, and it comes drizzled with sweet and salty eel sauce, so I’d be curious to see how it matched with a red wine rather than the white (which got the job done just fine, though maybe the red would be better?)

Beer Nerd Musings: I’ve already gone off on beer terroir, so I’ll note that there are many beers aged in old Chardonnay barrels. Most of these tend to skew to the sour side, as barrels provide a good environment for the wild yeasts and bacterial beasties that are key to those beers. A great example that is usually available in the Philly area is Russian River’s Temptation, which is delicious. Some of Cisco’s Lady of the Woods occasionally makes its way down here as well, and that is well worth seeking out. There are some beers aged in Chardonnay barrels that don’t go the sour route, like Victory’s White Monkey, which is solid, but perhaps not really my thing.

One other thing I’ll mention is that it took me a while to get into sour beer, but on the other hand, I seem to have great luck blowing people’s minds with sour beer at beer club. I suspect sour beer would make a good entry point to the world of beer for wine drinkers.

So there you have it. Stay tuned for a look at a rather nice Pinot Noir (both in my glass and in my meal).