Do you have a lot of money? Then Vintage Port is for you! I took a flier on some 2011 Vintage Ports, but man, they sure do put a hurting on the wallet. I can’t say as though it’s something I’ll be doing very often, but then, it’s still an interesting aspect of this pursuit. As mentioned earlier this week, Vintage Ports appear to be the pinnacle of the Port world, hence the expense.

A Vintage Port is made entirely from the grapes of a declared vintage year. Only 3-4 years in a decade, on average, are declared vintage years and the decision is made by each individual port house (or “shipper”). The decisions do not come lightly, and they generally seem to group together. The decision to declare a Vintage is made in the spring of the second year following the harvest. Last year, the decision was made to declare 2011 as a Vintage year, and all signs point to this being a classic Vintage that could rival any of the past 20 years, if not further back than that. As mentioned in my earlier post, Vintage ports are released relatively young, but they are meant to age in the bottle, and will last decades. They say the 2011 Vintage is ready to drink right now, but will continue to evolve over time.

There are also Late Bottled Vintages (LBV), which are still from a single year, but come later in the aging process, and thus don’t quite have the same quality of Vintage years. There are different ways to treat these wines, but filtered LBV Ports are meant to be drunk right away, while unfiltered LBVs can lay down for a while, just like Vintage ports. LBV ports tend to be much more cost effective, from what I’ve seen, but then, the quality is clearly not as high as Vintage Ports.

What we have here is Graham’s 2011 Vintage Port, generally regarded highly by Port nerds (at least as far as I can see). It was certainly very expensive, but it at least came in a small 375 ml bottle that is at least approachable to tackle in a relatively short timeframe (it will certainly last a long time, like all port, but it apparently loses its distinct character after you’ve had it open for a while). Vintage ports are unfiltered, so I did need to decant this first. I saved the dregs of the bottle for use in my upcoming Beef Bourgogne recipe, which will hopefully impart a little extra zing. 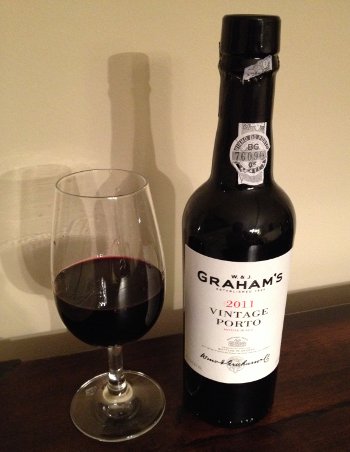 Graham’s 2011 Vintage Porto – Pours a dark red color (robey tones, bro), purple around the edges. The nose is beautiful, lots of sweet fruit, berries and plums and the like, but also a light earthiness that matches very well, along with hints of not-quite clove spice (I mean, it’s not spicy, but it’s bringing to mind clove for some reason). The taste starts with an intense rush of flavor, again lots of sweet, rich fruit and berries, but that’s tempered by the earthiness from the nose, an almost tobacco type feel here, with that quasi-clove spice character pitching in as well. More complex than I’m used to from port, but it’s all harmonious. Mouthfeel is medium to full bodied and has a nice richness to it. Well matched acidity and a surprisingly dry finish. Not crazy dry, but for a port, certainly so. A hint of pleasant boozy heat also works its way in. The balance here is superb, and everything works well together. Overall, one of the best ports I’ve ever had, though the price still stings a bit. A-

Beer Nerd Musings: As I mentioned previously, there are beers aged in Port barrels, though I don’t know of any that are specified as Vintage port barrels, which would be interesting. One of the things I’ve been wondering about barrel aging is how the age of the barrel impacts the secondary use. Would a Vintage port barrel (with 2 years primary use) be much better to use than a 30 year Tawny Port barrel? I suppose the same could be said for Bourbon barrels, and it may be something I pedantically pursue by emailing brewers when I get drunk. Only one way to find out, I guess.

Given the expense, I would clearly never use Vintage port with my homebrew, but as I mentioned in the previous port post, Graham’s appears to be my favorite of the shippers, and their Six Grapes reserve is pretty awesome in my book. I would definitely consider soaking some oak cubes in Six Grapes and using those to age my beer on…

So that concludes this weeks’ Port festivities. I believe this coming week will stay in the wine world, with a white and red, though who knows how this weekend will strike me. See you next week!