If you’ll permit some of that navel gazing that bloggers are famous for, I’d like to spend some time bloviating about how this blog gets written. Before you start screaming and throwing little pickles at me, I’d also like to note that I’m not the only one who has done this before. A couple years ago*, Ed from The Dogs of Beer wrote a similar post, and it set off a series of other posts from other bloggers. Yes, it’s all naval gazing to an extent, but I have to admit that I enjoyed reading about how other folks in the fraternity of beer bloggers construct their posts. I’ve been doing this for a little over three years now**, and have settled into a comfortable groove… that doesn’t appear to resemble anyone else at all. Not least of which because at least two of these people appear to be awake at 7 am, which is totally crazy town. I’m a night owl, and do most of my blogging after 10 pm (if not later).

But let’s not get ahead of ourselves. The process begins with… beer! As you might imagine, we have a large procurement department, so we’re always scouring the area (and social media) for new beers, bottle releases, and the like. I won’t bore you with the details, but suffice to say, my eyes are bigger than my liver, and thus I almost always have a large quantity of interesting, blog-worthy beer on hand at all times. What is blog-worthy, you ask? Initially, my plan was to write about every beer that I drank. Right now, this is a more difficult question, but lately, they tend to be beers that require some effort to acquire and/or understand. Maybe they have a good story behind them. Maybe I’m new to the brewery. Maybe I went out of my way to snag it and want to justify the extra effort. Maybe it’s a style I’m not that familiar with. Or, who am I kidding, maybe it’s spent some time in a barrel of some kind.

So any given post is generally initiated on the weekend. I tend to only really review beer that I drank alone, mostly because if I’m drinking with friends, I don’t want to be rude and bury my nose into my phone whilst I tap in some detailed notes. There are occasional exceptions, and sure, I might take a picture and check in on Untappd, but for the most part, I’m drinking at home on Friday or Saturday night. My goal these days is to drink no more than 3 blog-worthy blogs a week (and less is fine, though that usually doesn’t happen).

I crack open a bottle, pour it into my glassware of choice, and snap several quick pictures with my phone (believe it or not, the pics that show up on the blog are usually the best, most clear pics). I go through the beer nerd tasting routine. Appearance, smell, taste, mouthfeel, rinse and repeat. As I’m doing this, I’m taking notes on some sort of computing device (desktop, laptop, tablet, they all work). Most of the tasting notes are written in the first 5 minutes or so, though I will usually revisit as I’m finishing up the first glass, just to make sure that, for instance, a sweet beer didn’t get cloying, or to note how the beer changed as it warmed up. If I’m particularly inspired, the research phase of blogging will start while I’m drinking as well (but always after the tasting notes are practically done). This mostly consists of lazy googling, and generally ends quickly, as some shiny new object catches my attention on the internets. On rare occasions, an idea for a post will crop up around now.

At the end of a given weekend, I’ll have a few sets of tasting notes. My ideal schedule is to post something on Monday, Tuesday, and Thursday (aligning with the three blog-worthy beers I had that weekend). As I mentioned earlier, other bloggers seem to start their process in the early morning, which is crazy talk here at Kaedrin HQ. Most of the time, I’ll start my research phase (that fancy phrase for googling) after I’ve had my dinner and am lazing around for a bit. At this point, I should also point out that Kaedrin employs a crack squad of chain-smoking monkey researchers for much of the tedious detail work, and they’re very thorough. 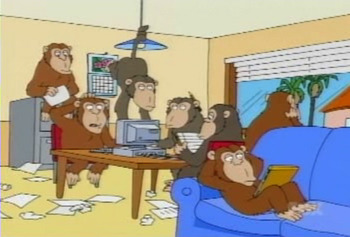 What I’m really looking for is an angle for my post. I’ll occasionally come up empty and just bang something out in a few minutes, but most of the time I’m able to find something I can hang a post on. A brewery profile, a pedantic style discussion, an even more pedantic exploration of the brewing process, historical notes, personal digressions, and so on. In rare instances, I’ll be inspired to write something in Screenplay form, or maybe do something off the wall, like a Choose Your Own Adventure Beer Reviews type post. After three years, some of these topics are starting to get a bit thin. You can only wax philosophic on a given beer style so many times before you start repeating yourself.

In any case, I haven’t started writing yet. I’m just researching and formulating. Instead, I head down to my basement and exercise (gotta work off those beer calories somehow, amirite?) and this is where the idea for a given post really starts to form (or, uh, fall apart). Exercise is all about tedious repetition, so it’s good to have something rubilating in your head during that time. Once I finish exercise, during my “cool down period” I try to bang out a first draft. I may or may not be successful at completing this, but that’s when the writing starts. I’ll once again, take a break and shower off (so I suppose I do get ideas in the shower sometimes), after which I fire up Spotify and go into full blown panic mode, and crank out the rest of the entry.

Once a draft has been completed, I need to take a few minutes to get the picture ready (cropping, resizing, etc…) and categorize the post (look at all those categories over there on the right!), which again gives my brain a chance to think about something else for a minute. Then I edit the post. This consists of four primary activities. First, fixing grammar and typos and whatnot. Maybe adding a link here or there that I forgot whilst I was writing. Boring stuff. Second, I tend to be longwinded, so I am almost always removing something I wrote in order to make the post flow better. I’m almost never successful in this, and often produce bloated posts (like this one!), but I do try. Third, I clean up the tasting notes a bit, and try to add some levity. I write technical documentation in my day job, so I find my tasting notes tend to feel kinda… samey. That might make them boring to read, but they do tend to at least be consistent. But if I can get a zinger in there, all the better. Finally, I make a conscious effort to bring the funny somewhere in the post. The results of this process are dubious at best and I will often rely on lame pop culture references or the infrequent meme, but again, I’m at least trying. On the other hand, I’m genuinely proud of the stupidity of the meme I made on this post, and I do love making obscure pop culture references that few people will ever understand.

And that’s just about it. Publish the post, and obsessively check my stats, which are pitiful. The actual writing of the typical post usually takes 30-60 minutes, though longer, more creative posts obviously take more time. Go figure! One interesting thing I’ve noticed lately is that writing about new beverages has really opened up options for the angle of approach. There’s usually something interesting about the beverage itself, but even if there isn’t, I feel like writing about a given beverage with a beer nerd’s perspective makes for some interesting observations. Perhaps I should continue writing about these other beverages, if and when the opportunity presents itself.

Well, I hope this was enlightening and yep, I’m pretty sure no one is reading by now, but hey, it’s all good. This was fun. We should do it again sometime. In any case, this weekend is seeing the first non-alcoholic beverages that will be blogged about here, though I think I’ll also hit up some rye whiskey too. The following weekend will be tea, followed by Scotch… and then my 40 days are up, and I’ll be back to beer with a vengeance. So far so good.

* We like to be timely here at Kaedrin, which is why we usually post about current events and topical stuff about a year or two later.

** Though I will also note that I’ve been blogging over at my generalist blog for almost 14 years, so take that.