Before I was obsessed with beer, I was obsessed with Coke. This may seem odd given how much of a novelty whore I am when it comes to beer, but I spent decades of my life pining for but one drink: Coca-Cola. When I was but a wee nerd, during the early stages of the cola wars, my parents would limit my brother and I to one cola a week. They didn’t take sides in the cola wars, preferring to simply buy whatever was on sale. My brother and I, however, took up arms for Pepsi and Coke respectively. For reasons beyond my understanding, my parents decided to fan the flames of this conflict, pitting my brother and I against each other.

We finally got fed up with the constant attrition of war and decided to make an appeal to a higher authority. We left a note for none other than Santa Claus himself, explaining our dilemma. We providing a can of each soft drink along with some chocolate chip cookies, with the understanding that Santa would choose one over the other and thus decide the fate of the cola wars in one swift maneuver. I’m sure you remember the nervous energy of Christmas Eve and the challenges that presents to sleep, but this particular year was especially grueling. Nevertheless, we soldiered on and when the big morning finally arrived, we bound down the steps to find… an empty glass and a note that said “I prefer milk.” That magnificent, clever bastard! And my parents were apparently pretty good too.

Anyway, my love for Coke continued unabated for many moons, but it wasn’t meant to last. As my love for beer waxed, my love for coke waned. It was not an easy transition, but I managed to break the habit by giving it up for Lent for a couple years. So the irony isn’t lost as I spend some time during this Lenten season, when I vowed to drink less beer and explore other beverages, returning to Coke.

This past weekend, I drank two different Cokes. Believe it or not, I’ve already covered the debacle of New Coke on the blog (in relation to how sip tests like the “Pepsi Challenge” lead everyone astray, and how small samples of beer can do the same), but the short story is this: Coke replaced their main brand with New Coke, saw the disastrous sales that resulted, and reintroduced the original recipe as “Classic Coke” with one tiny little change: instead of using pure cane sugar, they used the newer, cheaper high fructose corn syrup. However, that little change only really happened in the US. Other areas of their world still use straight cane sugar, including our neighbors over in Mexico. What’s more, you can sometimes find bottles of Mexican Coke*, which are labeled as “Coca-Cola Refresco” and come in the classic glass bottle as well. So I snagged a bottle of that stuff and compared it to the standard corn syrup offering. 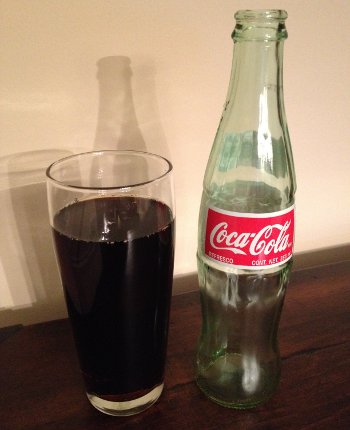 Coca-Cola Refresco – Pours a clear, dark brown amber color with a finger of quickly disappearing head. Smells sweet, with that undefinable spice character. You know how they say when you’re brewing beer that if you can pick out the specific spice you used, you used too much? Well Coke certainly doesn’t use too much, as you really can’t pick out stuff that is supposed to be in the recipe, like cinnamon, nutmeg, and coriander. Still, you do get a bit of a kick, and some of the other ingredients kinda show themselves. Taste is very sugary sweet, maybe the faintest hints of vanilla and caramel, with a slight spice component that lingers a bit in the finish. Mouthfeel is well carbonated, smooth, and a little syrupy towards the finish. Overall, yes, this is Coke alright. According to Wikipedia, sometimes Mexican Coke still uses HFCS, but this was definitely different from the regular offering.

Coca-Cola Classic – The color is a little more brown and the highlights less amber, but otherwise pretty similar appearance. The nose is obviously similar, but having these back to back, they do kinda smell a little different. Nothing dramatic though. The taste is also very similar, with less of an aftertaste. Mouthfeel is where I’m getting the biggest difference, as this feels more effervescent, highly carbonated, and less syrupy. That’s not necessarily better, just different.

Overall, I have to admit, I don’t really have a big preference for either… they are clearly different though, and would both hit the spot if I was ever in need of a Coke. I will say that I was expecting the Refresco to be definitively better than the regular, but I don’t see it. Certainly different though. I did not rate either of these because realistically, there are only, like, 5 options here, so, what? Coke gets an A, Pepsi gets an F? Right.

Beer Nerd Musings: I’ve always wanted to make a batch of homebrew that utilized Coke as a sugar addition. It’s mostly just sugar, so it should get eaten up completely by the yeast, just leaving whatever flavoring elements are in Coke, which could be interesting. I’ve actually been accumulating a bunch of odd ingredients in my regular homebrewing duties (a pound of unneeded DME here, an ounce of extra hops there) and so I thought it might be interesting to just throw it all together and hit it up with some Saison yeast, with the result being called “Clusterfuck Saison” or something like that. And I guess I could use Coke as a sugar addition, because why not? It’s not like it’s going against the Saison style definition (of which there really isn’t any). This summer, perhaps.

So there you have it. At this point, I’d just like to observe that I went for the entire post without making any lame cocaine jokes. Until now, I guess, but I’m going to pat myself on the back for showing some sort of restraint. Anywho, tomorrow, we talk Rye Whiskey. Stay tuned.

* You can also find pure cane-sugar sweetened Coca-Cola in select 2 Liter bottles during Passover (as HFCS is apparently not Kosher enough for Passover). It can be hard to find and unpredictably stocked (it doesn’t fly off shelves like BCBS, but it’s not an easy get either), but Passover Coke is not a legend, I’ve definitely had some back in my Coke-obsessed days and basically done the above comparison. Passover starts on 4/14, so keep an eye out for 2 liter bottles with yellow caps!