When Main Brewing Co. expanded their brewery, the stress was getting to them. The label on this beer says that when they ran out of creative juice, they just decided to have Another One. It’s an IPA with a very clean malt bill and hopped generously with Warrior, Cascade, Citra, and Simcoe. Creative juices flowing, they went ahead and made another beer with the same hop schedule, but a much darker malt bill. The result of that was a beer I had a couple weeks ago, Weez. It was fine, but I lamented the fact that I’d never had this pale counterpart so that I could compare notes. As luck would have it, I ran into a bottle last week, and now here we are. It might seem paradoxical to start my night with a beer called Another One, but that’s what I did on Friday: 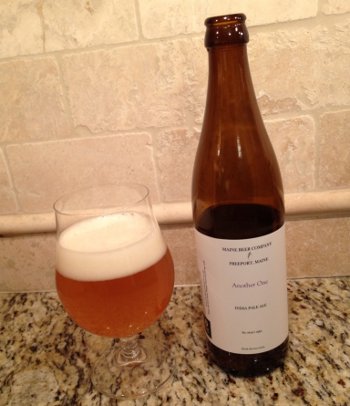 Maine Another One IPA – Pours a light golden yellow color with a couple fingers of dense head that leaves lots of lacing as I drink. The nose has a huge Citra hop component that comes through strongly, a big whiff of tropical fruit and with some herbal, floral, grassy notes pitching in too. Cascade and Simcoe come out a little more in the taste, with the fruity flavors leaning more towards grapefruit, and an increase in the herbal, floral, and grassy character too. Some hop bitterness emerges towards the finish and lingers a bit. Hops are doing all the heavy lifting here, with almost no malt backbone to speak of. Mouthfeel is light with a very tight, smooth carbonation. It’s not watery, but it’s very lightly bodied and the finish is dry enough that it doesn’t feel thin. So it comes off as quaffable, is what I’m saying, and that’s good. Overall, this is a rock solid IPA, better than its darker counterpart, Weez. borderline A- stuff, but I’ll stick with my initial gut feeling of B+. But it’s a high B+

So there you have it, the lighter counterpart works better than the darker. Go figure. One of these days I’ll need to try my hand at a dark, hoppy beer. In the meantime, I’m told I really need to try Maine’s King Titus, a beer that seems pretty easy to find around these parts. But that may be a while…