Maryland’s Evolution Craft Brewing Co. joins the ranks of the few, the proud, the patient: practitioners of the Solera method in the beer world. The base beer is a rather straightforward American Amber Ale called Prelude Red, but it’s placed in barrels (along with some bacterial beasties), soured, and blended with younger batches in the style of a Flanders Red. Evolution has added their Solera’d wrinkle, blending each new batch with all previous batches (and only bottling a small portion of the result, thus leaving enough liquid for future blending). Each cycle increases the average age of the bottled liquid, adding maturity and depth while retaining a certain level of freshness. Some Sherry producers have been known to do this for over 50 years, with each release theoretically containing traces of each and every batch. Evolution is only in their third year, so while this still feels very much like a standard Flanders Red, I’m really curious to see what it’s like in a few years (and onward). 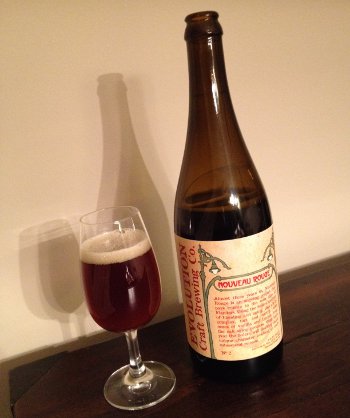 Evolution Nouveau Rouge No. 2 – Pours a mostly clear amber orange brown color, nice highlights when held up to light, and a finger or so of off white, fluffy head. Smells of vinous fruits, cherry, plums, oak, vanilla, vinegary sour twang. Taste follows the nose: vinous fruit, cherry, plums, oak, and vanilla notes are certainly there, perhaps not as intense as the nose suggests, but really good. Mouthfeel is on the lighter side of medium bodied, a little acidic, pleasant vinegar. Starts with a nice richness, though it doesn’t quite last through the finish – something I imagine solidifying over time with future iterations. Overall, this is already a pretty good Flanders Red, but I’m really excited to see the evolution of future batches (pun intended!) B+

Evolution continues to be a solid semi-local contributer that I need to explore more thoroughly. I expect to snag some of their Migration series soon enough, so keep an eye out. And, of course, Lot 3 and Lot 6 are nice IPAs that are in the rotation somewhere (come to think of it, I haven’t had one of either in a while).