After ruining my last batch of beer with an overly ambitious yeast harvesting scheme, I’ve returned to a recipe that has worked in the past, and will no doubt work well again. Of course, I’m tweaking the recipe considerably, as I’m wont to do, but the basics are pretty well the same. As with last year, I’m brewing this batch of beer for a specific event in mid-March. It’s called Fat Weekend, a annual gathering of portly friends from all over the northeast (and some points west). To be sure, we’re not that fat, but as we like to say, fat is a frame of mind, and our caloric intake over the course of the weekend is easily 5-10 times our normal rate. Last year, we housed about half a case of my beer pretty quickly, so this year will be a full batch (as opposed to the 2.5 gallon batches I’ve been making). And again, there are some tweaks to the recipe and it is scaled up to a 5 gallon recipe, though I think it’s pretty similar: 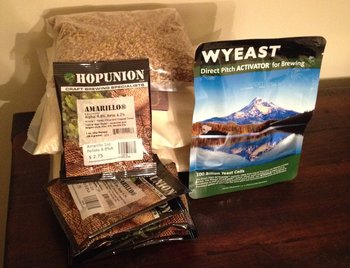 This was perhaps a bigger change than I let on. Gone is the Vienna malt, and I only really scaled up the CaraPils (for body). The Crystal 20 remains the same, and the Turbinado sugar was only partially scaled up. Hop wise, I went with a Simcoe/Amarillo blend, with Simcoe providing the bulk of bittering (and just a a bit of flavor) and Amarillo pulling duty on flavor, aroma, and dry hops. And just to switch things up a bit, I went with the American Ale II yeast, which seems to be a clean yeast that will still provide a little citrus boost to the hops (so I hope). Furthermore, I’m planning to keg this batch and transport the results in growlers.

So it might be a bit disingenuous to give this the same name as last year’s Fat Weekend IPA, but hey, I’m working on it. From a recipe standpoint, I’m thinking this is just about where I want to be. Last year, I really wanted to use this Simcoe/Amarillo hop schedule, but was stymied by a lack of Amarillo and fell back on Falconer’s Flight and Citra to make up for the difference. The only real change I could see myself making next year is if the Conan yeast becomes more widely available (whether that be ECY 29 (Northeast Ale) or something else), but I’m definitely curious about this American Ale II yeast (from the descriptions I’ve read, it seems to have similar properties, though it’s clearly not the same yeast).

And this is a first, I forgot to take an OG reading. What can I say, I’ve been fighting a cold and hadn’t quite gotten over it on Saturday. The recipe should have yielded something in the 1.067 range, and given my previous experience, I probably hit something around there. I’m pretty confident that after two weeks we’ll be in good shape (somewhere around 7.1% ABV).

Next up on the schedule is some sort of barleywine, which I’d like to give a bourbon soaked oak treatment to (or perhaps I’ll go with something more exotic, like Port wine soaked oak, we shall see), then do the whole straight, oaked, and blend of straight and oaked versions. From what I’ve had of Bomb & Grapnel, the blend seems to be doing the best, so maybe I’ll lean more heavily on that… After the barleywine, something light and crushable for summertime consumption (either a 4% pale ale, or a light saison). Then I plan to do something similar to Red Heady again in the fall, hopefully not screwing it up that time. After that, who knows? Maybe a redux of my Christmas Ale (a spiced winter warmer) or another batch of Bomb & Grapnel (with some slight tweaks). But now I’m getting way ahead of myself.