This is a beer that’s been on my radar for a while now, and I finally pulled the trigger. My interest primarily originated from the name of the semi-local (let’s call it regional) Virginia brewery, which is Blue Mountain Barrel House. What can I say, I’ve got a one track mind when it comes to barrel aged beers, and this place sounds like they’d do that sort of thing. Indeed, brewmaster Taylor Smack (perhaps the second best brewer name in the business, just behind Wayne Wambles of Cigar City fame) cut his teeth working at the Goose Island brewpubs in Chicago. You know, the folks that do Bourbon County Brand Stout? As barrels go, they source from four of the big guys (Makers Mark, Four Roses Yellow Label, Wild Turkey, and Elijah Craig), which represents a nice cross section of the market. So that’s a good pedigree, though it also sets the bar pretty high (to be sure, I didn’t know this before I drank). Fortunately, this was pretty good stuff: 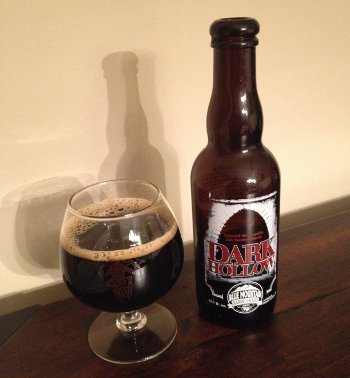 Blue Mountain Barrel House Dark Hollow – Pours a black color with half a finger of quickly disappearing tan head. Smells strongly of bourbon, with some oak, vanilla, cocoa, and caramel pitching in and just a hint of roast and chocolate. Taste is also bourbon forward, very sweet, with a more prominent roasted malt character pitching in the middle, cocoa, but that’s all overtaken by the bourbon, with some caramel, oak, and vanilla. Mouthfeel is full bodied, rich, and chewy. A little booze makes itself known, but nothing unpleasant. Overall, this is a solid bourbon barrel stout, but not quite BCBS levels. Perhaps an unfair comparison, as Dark Hollow is doing its own thing and it’s definitely something I’ll hit up again at some point. B+

Certainly a brewery I’d like to sample more of, including a beer called Local Species, which is a Belgian pale ale made from the second runnings of Dark Hollow mash (and also aged in Bourbon Barrels). Color me interested.