As expressed recently, I love this time of year. Horror movies, candy, and beer, what else do you need? From a seasonal beer standpoint, you’ve got the old standby of Oktoberfest beers that have a big following, and I certainly give one or two a shot every year (I certainly quaffed that Oktoberfest Revolution a couple weeks ago), but they’ve never really blown me away and made me look forward to the season. As the Beer Rover notes, the most exciting fall beers are the “fresh hop” ales… but he lives in San Diego, which has a better proximity to fresh hops than us East Coasters. We certainly get our fair share of them (I really enjoyed Tröegs’ take from last year), but nothing like the glorious insanity that overtakes the west coast.

But the most popular seasonal tipple appears to be pumpkin beers, though plenty of folks just don’t care for them. There’s also this constant whinging about pumpkin beers showing up on shelves earlier and earlier every year, which is a bit odd to be sure, but no one’s forcing you to buy this stuff in July either. The Beer Rover himself calls it a novelty and sez he’s “good for one about every three to five years.” It’s a fair point, but he also mentions that “better beer bars” in his area don’t seem to stock pumpkin beers. That doesn’t really hold up around here though. The first place I checked, Teresa’s, has Pumking on their menu right next to Pliny the Elder, and other decent beer bars out here in the burbs have similar lineups. Not that any of this means anything, no one sez you have to like every style and is it really worth spending this much time on it? As someone who just wrote this post, I’ll say no (I’m wasting time so you don’t have to).

So while I can certainly understand the lack of enthusiasm from some corners of beer nerdery for this style, I’m personally always down for trying a few during this season. After all, It’s Decorative Gourd Season, Motherfuckers, and why not chuck those gourds into some beer and spice the crap out of it. What we have here is semi-local brewery Spring House’s zombie-themed offering, a decidedly cinnamon-forward take on the style that’s been popping up in the area regularly for the past month or so. 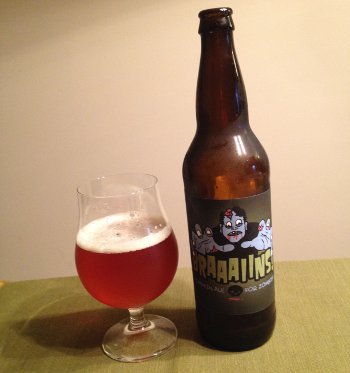 Spring House Braaaiins! Pumpkin Ale for Zombies – Pours a clear golden orange color with a finger of dense white head and decent retention. Smells strongly of cinnamon with a sweet, bready note, like pie crust. Maybe some maple and pumpkin in the nose as well. It’s a great aroma, but the taste doesn’t quite follow through. That cinnamon is still in full force throughout the taste, but that bready note from the nose never quite materializes, and neither does the maple or pumpkin. Mouthfeel is well carbonated, spicy, medium bodied. Overall, well, I hope you like cinnamon, because this thing is filled with it. I happen to like that particular spice, but it could have used perhaps a few other tweaks for complexity, as this comes off as a sorta one note beer, though I enjoyed that note well enough. B

I’ve got another Spring House seasonal, Big Gruesome Chocolate Peanut Butter Stout, that actually has pretty good word of mouth, and I’ve got at least one or two more pumpkin beers in the hopper too. Stay tuned!