A couple Sundays ago, Forest & Main did a bottle release and I made the trek up to Ambler to secure some liquid gold. Unlike my previous trip, I actually had time to sit down, sample a flight of beers, and eat dinner. Whilst there I met Mike Lorenz, famed jazz guitarist who I recognized as the guy who plays Tired Hands on a weekly basis (as well as bottle releases whilst we’re all waiting in line). Very nice fella, and I was glad to have met him. I also met a very generous woman who just decided she wanted to share some beers with the group, including stuff like a Voodoo BBVD aged in Pappy Barrels (!), KBS, and BCBS. We all agreed that she is a great American. So yeah, it was a fun night!

Anywho, they were releasing two different beers that night, and this seems to be their most frequent release. It’s their standard saison, called Solaire, which has been bottled with “several strains of Brett”. Well twist my arm, why don’t ya? 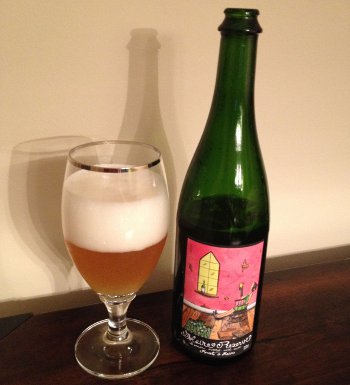 Forest & Main Solaire Reserve – Pours a golden yellow color with a big three finger fluffy head and lots of lacing, retention, etc… Smells very spicy, lots of Belgian yeast character, pepper, coriander and the like. Not picking up a ton of Brett here, though perhaps its masquerading as a simple byt potent Belgian yeast at this point. So quite a nice nose, actually. Taste is classic Belgian yeast, musty with a powerful dose of spices (pepper, coriander, clove, etc…), a nice bready sweetness rounded out by a very slight bitterness in the dry finish. Again, not a lot of Brett here, except perhaps for the dryness and maybe the intensity of the Belgian yeast character (both of which differ from the standard Solaire offering). The mouthfeeel is highly carbonated and finishes very dry. Clocking in at 5% ABV, this is crisp, light, and refreshing, damn near quaffable. Overall, this feels like a straightforward, but very well executed saison. I expect the Brett character to pick up with time, and I do have another bottle, so we shall find out, shan’t we? Incidentally, this paired nicely with dinner too! A- 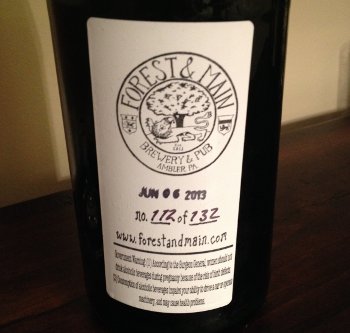 If I lived just a little closer to these guys, I’d be there often. As it is, this has been twice in about a month, so maybe that would be dangerous. Anywho, really looking forward to the other bottle (Palomino), so stay tuned for that…