Earlier this year, I got fed up with coming up empty on Cantillon hunts, and in a moment of weakness (or strength, if you prefer) I broke down and ordered several bottles straight from the source. I got some of the “normal” varieties, but was also quite pleased to have snagged a Saint Lamvinus and decided to save the best for last. Along the way, I unexpectedly stumbled onto a bottle of Fou’ Foune, and I’m really glad I had these two beers in relatively close proximity because they share a lot of character, while still being distinct. Now, for whatever reason, Fou’ Foune is hyped to high heaven (even for a Loon), while Saint Lamvinus is merely a prized masterpiece.

If the opinions of a bunch of strangers on the internet are to be believed, these two beers are either of identical quality (both being rated 3.98), or the Fou’ Foune is slightly better than its saintly brother (4.62 vs 4.51, which are both obscenely high). They both seem to be pretty rare, though maybe Fou’ Foune is moreso. They are both exceptional beers and are very reminiscent of each other. Maybe people like apricots more than grapes, eh? Or, you know, who cares? It’s great beer, I’m just going to drink it.

So this is made with merlot and cabernet-franc grapes which are soaked in Bordeaux barrels containing two to three years old lambic. Typical lambics are blended with “young” lambic to ensure the bottle conditioning generates enough carbonation, but the Saint Lamvinous is unblended. In place of young lambic, Cantillon sez they ensure carbonation in the bottle through the “addition of a liquor which starts the fermentation”. I suppose we could get into a whole wine versus beer thing at this point, but ultimately, Cantillon is doing its own thing, and they’re doing it very well: 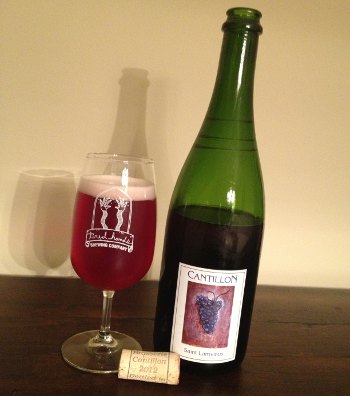 Cantillon Saint Lamvinus – Pours a deep ruby color with a finger or two of lightly pink, dense head. Smells of musty funk, oak, cherry, and grapes. Taste is sweet, with the grapes coming through, but not quite reaching Welches levels, if you know what I mean. The funk and light oak presence give it a nice kick that prevents it from being too fruity or too vinous. A nice tart sourness pervades the taste, escalating at the start, peaking in the middle and fading through the finish. Vinegar, cherries, grapes, tart sourness, funk, oak, this is very complex but well integrated. Mouthfeel is lightly bodied, crisp, and dry in the finish. Compulsively drinkable, a little lighter than expected, but still very nice. Overall, this is amazing stuff, easily the equal of Fou’ Foune and again, it was a very similar experience, with the major difference being the fruit used… A

I’ve stashed away a bottle or two of duplicates, but have otherwise run out of new Loons. I will, of course, be scouring the earth to get my hands on more (including a potential Iris sighting), so I’m sure you’ll see more Cantillon soon.