Another random impulse buy from the Warren Store during Operation Cheddar. I’d never heard of this before, but when I brought it up to the counter with my bottles of Double Sunshine, I received a knowing nod from another patron who commented on my purchase of “the usual suspects”. I asked about this one, but I had trouble getting a read on what he thought on this. After having the beer, I have to admit that I kinda get that. The label sez that “Switchback Ale was developed as a flavor concept, not adhering to any style guidelines”, and it sorta drinks like that. Sorta. I found it strongly reminiscent of a pumpkin beer… but without pumpkins or pie spice. Whatever that means.

It’s one of those beers that makes me wonder why I even bother posting a rating. As noted in the comments recently, my ratings tend to be relatively high, especially lately. This is partly because, well, who wants to write about mediocre beer? Also, as Rich speculated, there are enough resources out there and I obsessively read enough blogs/twitter feeds to have some intuitive sense of what’s going on. This beer kinda threw me for a loop though. I liked it well enough, and it is clearly a very well crafted and interesting beer. I couldn’t see it being something I reached for often (if it was regularly available to me)… but writing this post a week later, well, I could see myself cracking one of these every once in a while. I rated it relatively “low” on my scale though. Of course, a B is nothing to sneeze at, and that’s not objectively low at all. So take that. 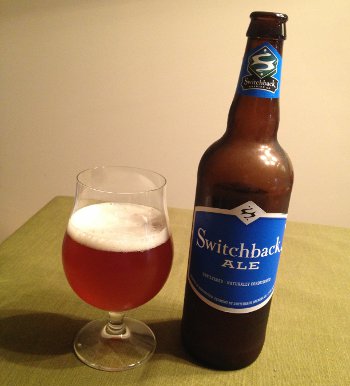 Switchback Ale – Pours a dark amber orange color with a finger of white head. Smells of bready malts, maybe buscuit malt, with some earthy hop notes for good measure. That breadiness may be coming from the yeast too… Taste is also very malt forward, mildly sweet breadiness and biscuit flavors (again, perhaps accentuated by the yeast), just a bit in the way of earthy, herbal hops. Mouthfeel is light bodied, well carbonated, crisp, and relatively dry. Goes down very easy. BA calls this a Pale Ale, but this sorta feels like the base for a pumpkin ale (i.e. no pumpkin or pie spice or anything, but with the malt/hop/yeast bill along those lines). Overall, well crafted and balanced but very subtle. It’s making a very nice accompaniment to dinner and it’s something I could see trying again, but it’s not among those face melting VT beers worth making the trip for (though it’s probably worth trying if you’re already there, and why wouldn’t you be)… It actually seems like it could be a really great alternative to those who want to celebrate the fall weather, but don’t like the heavy handed use of pumpkin and spice in so many beers. B

Apparently Switchback only started bottling last year (after a decade of keg only brewing), and they seem to be doing well. I’d be curious to try some of their other stuff some day…