I’ll be honest, the real reason I tried this beer was so that I could make this obscure reference: 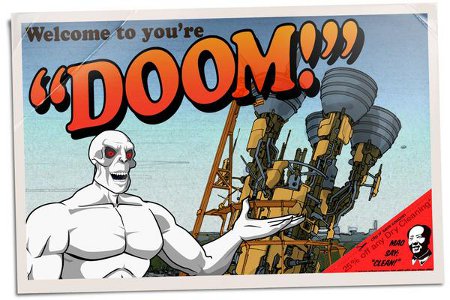 Killface: Why does it say “Welcome to you are ‘Doom!'”? What does that even mean, and why, for God’s sakes, is “Doom!” in quotes?

Killface: Is this some sort of ironic doom? Is the wink implied?

Killface: No, it isn’t. So please tell me how and why I’m suddenly a laughingstock!

Valerie: Uh…’cause you signed off on the proofs?

[Killface just taps the postcard on his thigh]

If you know what the hell I’m talking about, then we’re already friends.

Doom is basically a bourbon barrel aged version of Founders Double Trouble, their regular Double IPA. This… is an odd combination. Hops are volatile and fade with time, so aging a pale ale in general just seems like a bad idea. I suppose the idea is that the bourbon will add a malt flavor element that will make up for the faded hops, which might work if you can really time everything just right. There are a few other breweries out there that have tried this sort of thing, but I can’t think of any that are really popular, and the one example of a barrel aged pale ale that comes immediately to mind is Brewdog Storm, a total clusterfuck. But Founders knows their shit, so maybe they’ll fare better: 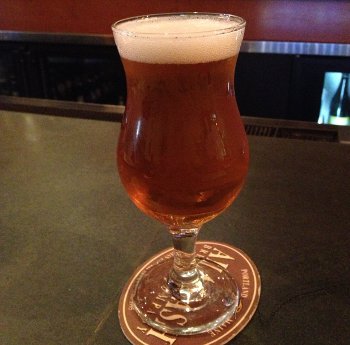 Founders Doom – Pours a golden orange color witha finger of white head. Smells of caramel and maybe some piney hops. Taste hits those piney, sticky, resinous hops pretty hard, with the boozy bourbon coming out a little in the finish. As it warms up, the bourbon asserts itself more, but still only just the barest hint of oak. Mouthfeel is medium to full bodied, sticky, tightly carbonated, and boozy. Overall, better than expected and even a little interesting, I’m glad I tried it, but I’d probably be just as happy with regular Double Trouble. B+

Founders continues to be a rock solid brewery, though I have to admit, they very rarely melt my face. I’ll still keep an eye out for new releases, and maybe someday I’ll truly get my world rocked.

2 thoughts on “Welcome To You’re “Doom””