I have a friend who has a really large head, but it pales in comparison to the fat head that represents the logo for Fat Head’s Brewery. I have to admit, I initially find that bulbous looking thing a bit of a turn off, but they seem to have fun with the logo and you know, he seems happy. Even jolly! And as we all know, it’s what’s inside the bottle that really counts, so let’s take a closer look at this Ohio brewery’s wares. I was fortunate enough to procure a few Fat Head’s beers thanks to a friend who was visiting the great state of Ohio (my army of mules is growing).

Legend has it, head brewer Matt Cole spent much of his youth living in a Yurt near Lake Constance in Austria, where he foraged for food and discovered some wild hops that he fell in love with. At the time, he just used it in his recipes, but when he served some “Hop-A-Noodle Soup” to wayward travelers who knew a thing or two about beer, they encouraged him to look into the beer brewing profession. Fast forward to 2009, when Cole was hired by Fat Head’s. Already a well established craft beer bar, Fat Head’s decided it was finally time to dip their toes into the fermented waters of brewing, and immediately made a splash, lead in part by this flagship brew, a well hopped West-Coast Style IPA. So how did it turn out? Pretty darn good: 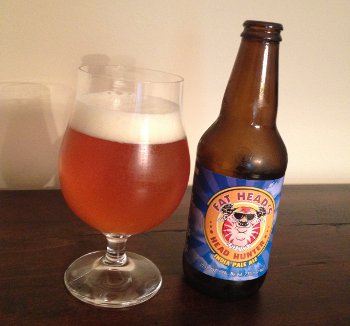 Fat Head’s Head Hunter IPA – Pours a slightly hazy golden orange color with a finger or two of fluffy white head, great retention. Smells of sticky, resinous hops, lots of pine, and some citrus hanging around too. Taste follows the nose, sweet with lots of piney, resinous hops, some citrus, maybe even some floral notes too. Nice bitterness pervading the taste from about the middle. Mouthfeel is medium bodied, well carbonated, a little sticky. Overall, it’s a nice little hop bomb they’ve got here. Perhaps my bottle isn’t the freshest, but as it is, I’m going with a B+

It probably doesn’t help that I had this in close proximity to another can of Heady, but what are you going to do? This is some great stuff though, and well worth checking out if you ever find yourself stranded in Ohio. I’ve got a pilsener and some sort of blueberry thing from Fat Head’s as well, but this IPA is the stuff I really crave…